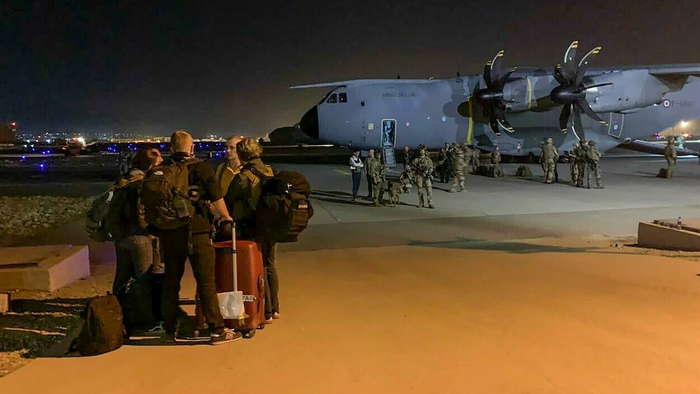 
Top US generals are saying that after the shocking scenes of chaos and death the world witnessed out of Hamid Karzai International Airport Monday, Kabul airfield is now “secure” – however with the Taliban just outside the gates providing its own version of “security” and order…

In a Tuesday morning Pentagon briefing, spokesman John Kirby announced a goal of evacuating between 5,000 and 9,000 people per day, mostly remaining American diplomatic staff and personnel, journalists, aid workers, as well as select local Afghans who worked with US forces and are now “wanted” by the Taliban.

On that front, Kirby interestingly acknowledged that there are some 500 to 600 Afghan national security forces actually assisting with security at Kabul airport. This is surprising given the Afghan government has collapsed and ousted president Ghani fled long ago, over the weekend.

The Pentagon indicated according to a Fox national security correspondent that:

Evac flights from Kabul will ramp up to one per hour over next 24 hours. Goal is to evacuate 5-9,000 people per day, but “circumstances could change.”

Kirby further unveiled that the generals on the ground are in “talks” with the Taliban about rescuing more Americans who are reportedly “trapped” in Kabul.

There might be as many as 10,000 Americans left in Kabul – clearly getting them out will be a huge logistical feat which will without doubt continue through the week.

Further, this exchange took place, worrisome and ironic as it is…

“Asked Monday if the U.S. is taking any steps to ensure military equipment does not fall into the hands of the Taliban, Pentagon logistics specialist Maj. Gen. Hank Taylor told reporters: ‘I don’t have the answer to that question.’“

And on the question of what actually happens after the August 31 ‘complete pullout’ deadline previously set by Biden, the Pentagon had no answers.

Kirby’s answer when pressed about the ongoing chaotic scenes in Kabul has tended to be simply to shrug it off and say “no plan is perfect”.