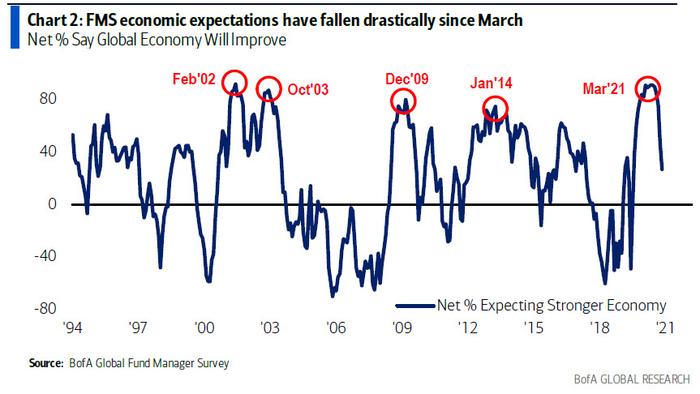 
Several months ago, in May, when looking at the latest BofA Fund Manager Survey we observed that even as the reflation trade was sputtering along and nobody had heard of the Delta variant, “peak Wall Street Optimism was now behind us” as sentiment had just peaked and all key indicators were rolling over.

Well, we were right: 3 months later, with China bracing for a softish (if not much harder) landing, with countries imposing Covid lockdowns all over again, and with the US consumer tapped out and no longer spending like a drunken sailor, the peak is long behind us and the painful return of gravity – and stimmy-free reality – is back on deck, and nowhere is it clearer than the latest Fund Manager Survey from BofA’s Michael Hartnett in which 257 panellists with $749bn in AUM, indicated that growth, profit and  inflation expectations are crashing as a result of what Hartnett dubs the “Peak Boom.” Yet even as the 2nd derivatives of both growth and inflation have fallen sharply, FMS investors do not believe a recession will occur. The majority of investors still expect above trend growth and above trend inflation at 69% (-5% MoM), albeit down from a peak of 76% in June.

Also curiously, few are panicking even as 84% predict the Fed taper before year-end (this is good, as it means no taper this year – the FMS majority is always wrong), which translates to cautious sentiment (BofA Bull & Bear Indicator dipped to 5.6 from 5.7 even as stonks hit an all time high on Monday).

And while this resurgent pessimism has led Wall Street to trim its EM, commodity, resources, and small cap exposure, Hartnett notes that
“TINA means extreme long stocks-short bonds AA intact”, yet a handful of “TINA turners” – such as Fed error, US fiscal fail, China credit, and US consumers hitting a wall – could well reverse this stock euphoria.

Drilling down into the various FMS categories, we start with macro where expectations for global growth have crashed to net 27% (lowest since Apr’20) 20 points lower M/M and down from a peek of 91% in March 2021.

… this despite investors raising size of US infrastructure spend from $1.4tn to $1.7tn.

… and as a result, just 4% expect higher global CPI in the next 12 months, the lowest since May’20, paradoxically even as short-term rate expectations remain high and lag inflation expectations more than historically….

Looking at the FMS quantification of tail risks, asset bubbles and China are rising as “tail risks” at expense of inflation/taper…

… even though inflation – in reality the right word is stagflation – remains the biggest risk facing the US economy.

… although expect that to change: as BofA notes, FMS “geopolitical risk” was ranked low (41% vs historic 52%) before Afghan crisis. It won’t be that low next month.

So in light of all these rising risks, how much cash do these suddenly spooked FMS have? Well, not much: according to the survey, cash as % AUM rose just barely from 4.1% to 4.2%…

… but not at the expense of commodities – there allocation was cut to lowest since Nov’20; falling to a net 17% and down from all-time high of 29% in July.

One reason for the sticky optimism: there was a surge in respondents expecting China to ease, up to net 78% from 44%.

Yet curiously, the allocation to equities is also peaking, down to a net 54% from a peak of 62% in April – although one wouldn’t know it by looking at stonks – and lagging lower growth expectations…

Shifting again and looking at the favorite FMS sectors, styles, and regions, there is a clear turn to defensive exposure, with health care the top sector for the 1st time since Nov’20..

… while tech is #2, even as it is still deemed most “crowded trade.”

Meanwhile, energy is Underweight for the first time since Feb’21, as materials were cut but utilities rise; large>small @ 10-month high, quality>junk @ 12-month high; long US & EU but capitulation out of Japan & China-fear keeps EM as big UW.

Finally, and perhaps knowing how much more noise than signal his survey carries, BofA CIO Mike Hartnett suggests a handful of contrarian trades – i.e., doing the opposite of FMS consensus – which include ”long bonds vs stocks, long staples/utilities vs banks; for “reflation resumption”, and finally long EM & Japan.