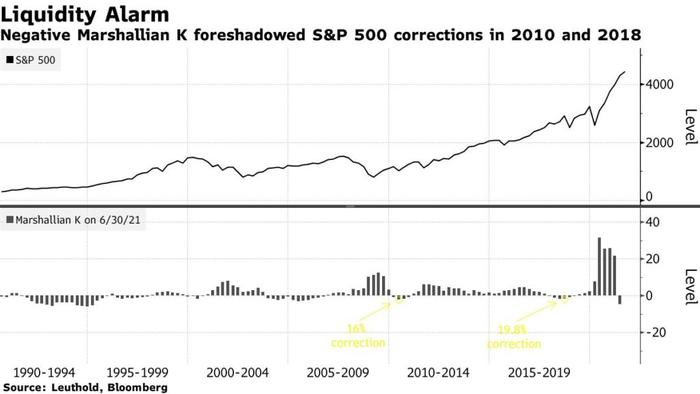 Last week, we discussed that further upside would be challenging with the market hitting new highs. As noted:

“Not surprisingly, the market didn’t make much headway this past week, given the current extended and overbought conditions. For now, ‘buy signals’ remain intact, which likely limits the downside over the next week. However, a retest of the 50-dma is certainly not out of the question.”

This week, such was again much the same. The market did register new highs but only by a small fraction. What is important to note is that these incremental gains are burning through buying power. Such leaves the markets increasingly vulnerable to a correction, given the proper catalyst.

However, for now, with volatility very compressed, there seems to be little to worry about. Despite falling consumer confidence, strong inflation readings, and weaker economic growth, the “bulls” continue to push risk on expectation the “Fed has their back.”

With volatility currently at the lows of its recent range, a pick-up in volatility would not be surprising. Over the last 6-months, corrections remain range-bound to the 50-dma which is currently 3% lower than closing levels.

However, as noted last week, a retest of the 200-dma should not be dismissed which is roughly 11% lower. While such a decline is well within the norms of a correction in any given market year, the low levels of volatility will make it “feel” worse than it is.

While the data currently suggests risks are somewhat mitigated momentarily, such does not mean it should be ignored. It is this view that drives our current view on portfolio positioning which we discuss below.

A Note On Inflation

This past week we saw the latest CPI print, which showed a modest drop in the annual rate of change in the index. Notably, while inflation weakened slightly, it is still running well above the pre-covid trend and well above the Fed’s inflation target of 2%.

As Michael Lebowitz noted for our RIAPRO Subscribers (Try Risk-Free For 30-Days):

“The graphs and tables below, breaking down 153 of the components of inflation, provide a broader analysis of Wednesday’s July CPI data as compared to June.

Also note, the average and median increases in the year-over-year changes rose significantly from June to July. The headline CPI number is supportive of those in the transitory inflation camp, but the underlying data is not as clear. Yesterday’s PPI data provides further concern that inflation may not have peaked yet.”

Between inflation, pressure from Congress, and robust employment reports, the Fed is getting pushed towards tapering current monetary policy. With numerous Fed speakers eluding to needing to taper and raise rates sooner than expected, we suspect Powell could make comments as early as the end of the month.

The Fed’s monetary accommodation continues as the primary market support. Therefore, it is worth noting a potential reversal.

Notably, despite a market trading at all-time highs, the number of stocks trading above the 50-dma is feeble.

Furthermore, deviations from long-term moving averages continue to get more extreme. As noted this past week, the deviation from the 200-dma poses a credible threat in terms of magnitude and duration.

In other words, it is possible the S&P could remain above the 200-dma for the rest of the year. The visualization of such deviations suggests an elevated risk it won’t.

Furthermore, as noted by Bloomberg, liquidity is evaporating from the market even as investors continue to chase stocks higher. To wit:

“‘Put another way, the recovering economy is now drinking from a punch bowl that the stock market once had all to itself,’ Doug Ramsey, Leuthold Group’s chief investment officer, wrote in a note last week.

How big a threat is this? While stocks kept rising during frequent negative Marshallian K readings in the 1990s, the pattern since the 2008 global financial crisis, a period when the central bank was in what Ramsey calls a ‘perpetual crisis mode,’ begs for caution.”

Nonetheless, bullish sentiment remains robust, with investor allocations remaining at record highs. Moreover, the market seems to think all of these issues are only temporary anomalies.

But such is the result of more than a decade of monetary interventions that have left investors with very few choices.

The Fed Gave Investors No Choice

Over the last few years, there has been much ink spilled over the value versus growth trade. Such was a point even we discussed in “Value & The Art Of Doing Nothing:”

There are two critical takeaways from the graph above:

First, of those eight periods, two occurred during the Great Depression, and one spanned the late 1990s preceding the “Dot.com” crash. Second, the other five are recent, representing the years 2014 through the present.

“The chart shows the difference in the performance $100 invested in a “value vs growth” index. While value investing has always provided consistent returns, there are times when growth outperforms value. The periods when “value investing” has the greatest outperformance, as noted by the “blue shaded” areas, are notable.”

Kailash Concepts made an interesting observation this past week:

“Over the last few years, the debate over growth vs. value has become intense. The bifurcation around the various approaches to different methods of investing money in the stock market has become almost personal. We believe some of this may be due to the pavement-scraping interest rates offered by everything from money market accounts, municipal bonds and corporate bonds. As the days of high yield savings accounts vanished, anything that has generated high returns over the short term is being hailed as genius regardless of merit.“

They are correct. In the process of inflating another market bubble to kindle “Animal Spirits,” the Fed forced investors to take on tremendous risk.

Such was the conclusion from the American Institute:

“The Federal Reserve has done more in the past 25 years than its founding legislators and early governors surely ever conceived it would. With that in mind, one wonders what the end game is, especially in light of two facts.”

“If there is a component of the growing disposition for risk inspired by the idea that the Fed will swoop in to save retail investors from failed ETFs, collapsed SPAC prices, a wave of microcap stock delistings, or any other consequence of their understandable but reluctant march up the risk curve, it is ill-advised. Any lasting solution is far more likely to come from markets themselves.”

So what do you do?

A Lack Of Options

As noted, our portfolios are long-biased, meaning we have more equity risk in our allocation than fixed income and cash. Given the market’s current structure, we only have three choices in how we manage our client portfolios currently:

Currently, there is a “lack of options,” as #2 remains the optimal strategy. The ultra-low volatility environment, and a persistent bid under stocks, keep shorting a suboptimal strategy. Doing nothing leaves us too exposed to an unexpected “volatility shock” in the market.

As such, our choice remains to reduce capital risk opportunistically. We realize that we give up some performance in the short term but can potentially add incremental “alpha” if a correction occurs.

In our view, we have a choice to either manage risk or ignore it.

The only problem with “ignoring risk” is that such has a long history of not working out well.