Crude oil prices pulled back slightly during Wednesday’s APAC session after rising 2.5% overnight. The US Senate passed a historic$1.2 trillion fiscal stimulus plan on Tuesday, paving the way for a massive infrastructure revamp if it wins final approval in the lower chamber of Congress. The material and energy sectors were among the best performers on Wall Street overnight.

The recent build in stockpiles points to weaker demand for fuel as the summer driving season is off the peak. Viral resurgence around the globe also had some negative impact to travel activity, weighing on oil prices.

Across the Pacific, China continued to impose heightened alerts and restrictions in major cities to counter a rapid Covid-19 flareup caused by the highly contagious Delta variant. Authorities have reported 111 new cases for Tuesday, down from 143 cases a day earlier. Most local infections were found in the eastern province of Jiangsu, one of its most important high-tech manufacturing hubs. Over 46 mainland cities have warned against non-essential travel and conducted mass-testing for the virus to curb its spread.

Stricter mobility constraints may dampen energy demand for the world’s largest oil-importing country. China accounts for around 26% of the world’s total crude imports, with over 40 million barrels imported monthly so far in 2021.

Technically, WTI entered a consolidative period after hitting a two-and-half year high of $76.95 on July 6th (chart below). Prices have since formed a “Wedge” pattern for possible breakout. Prices may find some support near the floor of the “Wedge”, but a breakdown may intensify near-term selling pressure and open the door for further losses. The MACD indicator is trending lower, suggesting downward momentum may be dominating. 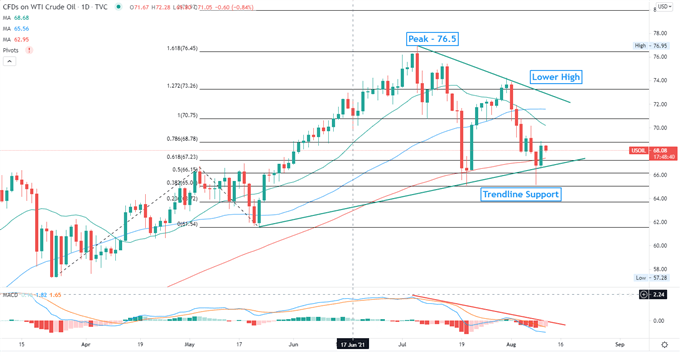