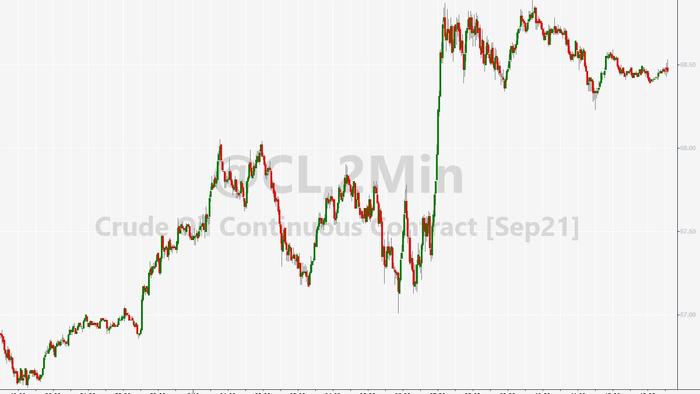 
Helped by the passage a the trillion-dollar infrastructure bill, oil prices extended yesterday afternoon’s rebound today (from a significantly sharp selloff last week blamed partly on fears the global spread of the delta variant of the coronavirus that causes COVID-19 would dent energy demand).

“Crude prices are rebounding as the rout that stemmed from delta variant concerns has run its course,” said Edward Moya, senior market analyst at Oanda, in a note.

“The headlines for crude have been mostly constructive, but the primary driver has been the overall risk-on theme that stemmed from Senate’s passing of the $1 trillion bipartisan infrastructure spending bill,” Moya said.

Prices were also buoyed by comments from EIA that U.S. gasoline consumption is expected to average 8.8 million barrels per day (bpd) in 2021, up from 8 million bpd in 2020.

Still, the EIA said U.S. gasoline consumption will remain below 2019 levels through 2022 due to the proliferation of people working from home.

Investors will swing their attention to tonight’s inventory data (and tomorrow’s official data) for any confirmation that short-term demand fears are a thing of the past.

After last week’s surprise crude build, analysts hoped for a drop to reappear to confirm the recovery narrative and they were right with a modest 816k barrel drop in crude stocks…

WTI hovered just below $68.50 ahead of the API print and did nothing after the small draw.

But the July WTI contract managed to close Monday above the July low at $66.41, marking that level as a “‘line in the sand’ for the oil market,” said Tom Essaye, founder of the Sevens Report, in a note.

“If support holds, which it likely will as long as the news flow regarding COVID does not continue to materially deteriorate, then WTI will remain rangebound between aforementioned support at $66 and resistance from July at $75 a barrel,” he said.