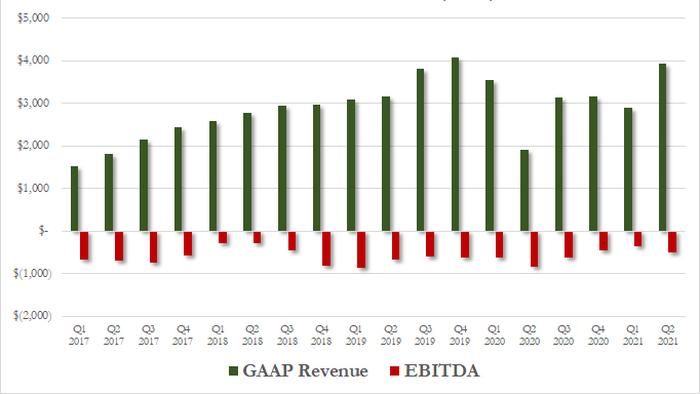 
After yesterday’s Lyft debacle which saw the company reports its first ever profit amid generally strong earnings and outlook, yet which sent the stock tumbling, Uber bulls were looking with dread to today’s earnings, knowing that only an absolute blowout report could avoid the same fate. They certainly did not want a miss, yet that’s precisely what they got when Uber reported that in Q2 adjusted EBITDA unexpectedly stumbled to negative $509 million, badly missing expectations of a (324.5) million loss, despite revenue and gross booking which both came in solidly above expectations.

Here are the results:

Yet despite this strong top line, the company report Adjusted EBITDA of ($509) million, which while 39% better than last year’s $837 million loss, badly missed expectations of a $324.5 million loss, and certainly nowhere near to Lyft’s historic profitability.

Mobility gross bookings soared 184% YoY to $8.6 billion, well past the $8.26 billion that analysts had projected. Most geographic regions saw a quarter-over-quarter improvement, while India’s Covid-19 outbreak dragged down Asia-Pacific bookings.

Gross bookings from delivery orders in the second quarter nearly doubled from the same period last year to $12.9 billion. That growth was marginal compared to the surge in the previous quarter though, indicating the “hyper-growth” phase could be over according to Bloomberg.

Uber also said its non-restaurant delivery gross bookings from grocery, convenience, alcohol, nearly tripled from December 2020 levels in June. As a reminder, all these will drop back to normal as soon as the covid situation normalizes.

And yet despite the surge in Delivery bookings which almost doubled, EBITDA barely budged and remained deeply negative, printing at ($161)MM in Q2 vs ($232)MM a year ago.

Another note: on a GAAP basis, Uber delivered its first net profit as a public company in Q2, however this number was also fake news as the net income of $1.1 billion was driven in large part by Uber’s stock in Didi which went public in June.

Looking  ahead, the company was quite optimistic, expecting:

Yet investors were quick to discount the company’s rosy outlook – which assumes the delta variant doesn’t hinder the ongoing recovery and it can taper incentive spending to recruit drivers – and instead the focus was on the huge EBITDA miss, which was the result of heavy spending to “revive driver availability” and to ease long wait times and high prices in many markets weighed on results. In other words, the ridiculously high prices that Uber is charging are now resulting in even bigger EBITDA losses. Go figure.

And speaking of negative EBITDA, Uber has had plenty, burning over $10 billion since the start of 2017 despite generating more than $50 billion in revenue over the same period. The company has yet to be profitable.

“In Q2 we invested in recovery by investing in drivers and we made strong progress, with monthly active drivers and couriers in the US increasing by nearly 420,000 from February to July,” said Dara Khosrowshahi, CEO. “Our platform is getting stronger each quarter, with consumers who engage with both Mobility and Delivery now generating nearly half of our total company Gross Bookings.”

“We successfully made large investments in Q2 to improve marketplace balance, and we are now well positioned to reach Adjusted EBITDA profitability by Q4,” said Nelson Chai, CFO. “As we make progress towards that important milestone, we expect our Adjusted EBITDA loss in Q3 to improve to less than $100 million in addition to record Gross Bookings between $22 and $24 billion.”

Yeah maybe, but investors sure don’t buy it with Uber stock tumbling more than 6% below $39. The reason – again – the company’s shockingly bad EBITDA number, the result of heavy spending to lure drivers back in the second quarter, which resulted in a wider loss than expected and raises doubts about the reliability of its labor model long term.