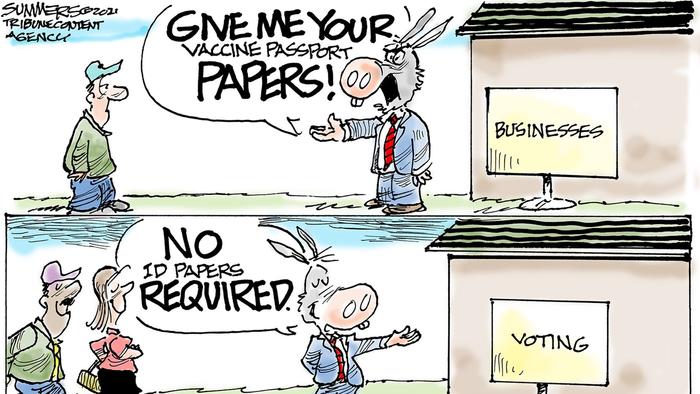 After New York City announced that it will mandate vaccine passports for entry to events and even restaurants and gyms, a Republican Senator has introduced a bill that would make it mandatory for any state using a vaccine pass system to also use a voter ID system.

The government mandated vaccine pass, which is being called the “Key to NYC Pass,” will become effective later this month and will also apply to employees of businesses using it.

Breaking News: New York will require proof of vaccination for indoor dining and gyms, Mayor Bill de Blasio plans to announce. It’s believed to be the first U.S. city to do so.https://t.co/W6FGP9ZIo5

The New York Post reports that the scheme “marks a significant escalation of the city’s efforts to curb the recent uptick in COVID-19 cases driven by the Delta variant, and will launch in mid-August and enforcement will begin in September following a public service announcement campaign, administration officials said.”

The report notes that there will not be an option to produce a negative test, and just as in San Francisco’s bars, the unvaccinated will be forced to eat and drink outdoors only.

Mayor Bill de Blasio proclaimed last week “We’ve got to shake people at this point and say, ‘Come on now.’ We tried voluntary. We could not have been more kind and compassionate. Free testing, everywhere you turn, incentives, friendly, warm embrace. The voluntary phase is over. It’s time for mandates, because it’s the only way to protect our people.”

Curiously though, anyone can still vote there without showing ID, a double standard exposed by Sen. Kevin Cramer, R-North Dakota, who has introduced a bill to mandate voter ID.

“If states that take federal money for elections feel the need to make residents verify a piece of information as private as their vaccination status just to return to normalcy, then they should have no problem requiring people to prove they are who they say they are when they go to vote,” Cramer said in a statement.

Cramer added that the measure “would ensure that those states are consistent in their identification requirements and shine a light on those who hypocritically oppose voter ID laws but support vaccine passports.”

When asked about the vaccine passport mandate in New York, White House Press Secretary Jen Psaki expressed support, dismissing Peter Doocy’s point that many Americans are waiting for the FDA to fully approve vaccines or simply do not want the vaccine for religious or medical reasons.

Peter Doocy to Jen Psaki on NYC’s vaccine mandate: “Does the White House think that that is fair to people who may have a religious reason for not wanting the vaccine or might just be waiting for the FDA to approve it fully before they get it?” pic.twitter.com/wQMjYQKwD4

Psaki also avoided answering a question from a Daily Caller reporter who noted that communities of color have lower vaccination rates than white New Yorkers, and therefore the same ‘it’s discriminatory’ argument Democrats have applied against the introduction of voter ID applies to the vaccine pass system.

.@DailyCaller‘s @ShelbyTalcott asks Jen Psaki if the WH is “concerned…that the burdens imposed by governments and businesses like this New York City proof of vaccination is going to fall heaviest on these minority communities” seeing as how the rate for Black New Yorkers is 31% pic.twitter.com/rJn7uN8W4p

Others pointed out the double standard:

Looking at these figures, it seems impossible to dispute that NYC’s upcoming “vaccine mandate” policy will have a racially disparate impact. Is that still the primary standard by which a policy must be judged, or not? https://t.co/4kl4JjunBg

Sound hypocritical to me.

No wonder why so many of us are moving to the free state of Florida!!! https://t.co/qEozg59ViP

NYC is announcing today that they will require vaccination to go to the GYM, to go out to eat, go to the movies, or go anywhere.

I’ve lived here my entire life. I’m done. Will be planning my move to FL or TX immediately.

We get the fascism we allow. We have allowed this.

Enforcement and adoption: What do UK’s recent regulatory aims for crypto mean?

278 Million LUNA Gets Burnt With The Released Address, Do Kwon Says It’s Pointless!