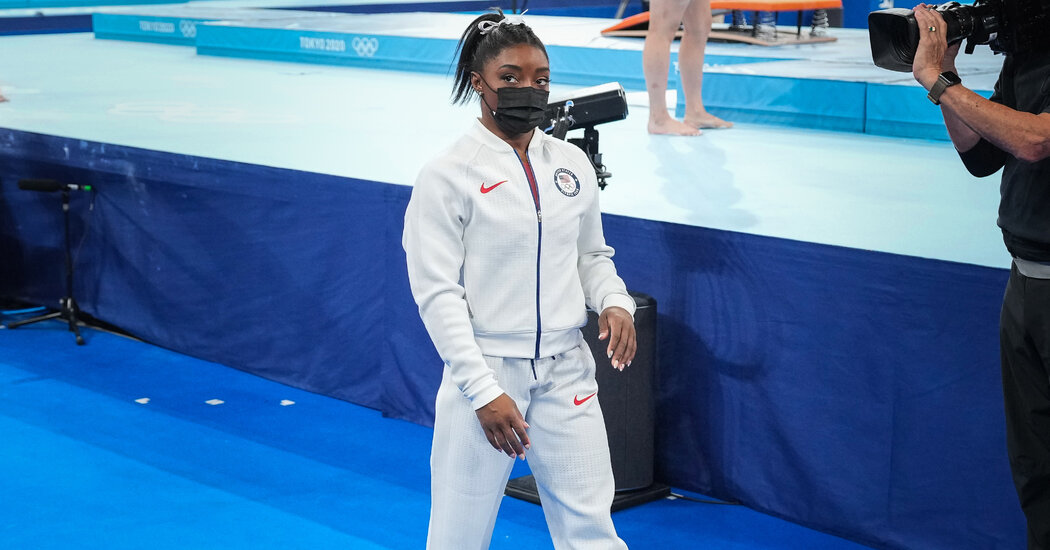 
Simone Biles, the four-time Olympic gold medalist, will not compete in Thursday’s individual all-around competition after withdrawing from the team finals because of a mental health issue, according to an emailed statement from U.S.A. Gymnastics.

Biles will be evaluated daily to see if she will participate in the event finals next week.

“We wholeheartedly support Simone’s decision and applaud her bravery in prioritizing her well-being,” the statement said. “Her courage shows, yet again, while she is a role model for so many.”

Biles, 24, had qualified for all four event finals and was expected to win gold in at least three of those events. In the all-around, she was hoping to repeat her title from the 2016 Rio de Janeiro Games to become the first woman to win back-to-back titles in the all-around in 53 years.

Biles stepping back from the Olympic all-around marks the end of an era in the sport. She hasn’t lost an all-around competition since 2013 when she was 16 and still wore braces. The contest tests individual athletes on all four disciplines: vault, uneven bars, balance beam and floor competition, to determine the most complete gymnast.

While she had come to the Tokyo Olympics feeling “pretty good,” the weight of expectations on her as Team U.S.A.’s biggest star at the Tokyo Games became tougher by the day, and in the hours before the team final she said she was shaking and couldn’t nap. In the end, the pressure was just too heavy for her to bear, she said after withdrawing from the team final on Tuesday.

During her vault, the first event of the team final, Biles got lost in the air and didn’t know where her body was in relation to the ground. She ended up performing a much simpler vault than her usual daring ones. On the landing, she bounded forward, trying to stay on her feet.

Biles told her coach and a team doctor that she was not in the right “head space” to continue because she was afraid of injuring herself, and also because she didn’t want to jeopardize the team’s chances at winning a medal.

“I’m still struggling with some things,” Biles said after the event. “It just sucks when you are fighting with your own head.”

The U.S. team had dominated the sport for more than a decade before the Russians won the gold medal on Tuesday. The U.S. team, with Sunisa Lee, Jordan Chiles and Grace McCallum, finished the competition while Biles cheered them on. They won the silver medal.

Jade Carey, who had the ninth highest score in qualifications, will take Biles’s place in the all-around final. Lee, of St. Paul., Minn., will be the other gymnast in the all-around for the U.S. team. It is not clear whether Biles will compete in any of the individual apparatus finals.

In the days leading up to the Olympics, Biles had been struggling with a few skills and was trying to overcome a mental block that kept her from easily performing her routines. That mental block is not uncommon in gymnastics, Jess Graba, Lee’s coach, said, but it usually happens at practice, not at a competition.

“I think a lot of people don’t realize that it’s such a mental sport,” Graba said in a telephone interview on Wednesday, explaining that the mental blocks take a while to work through before a gymnast can begin trusting herself enough to perform her skills again.

Regarding Lee’s experience with those mental blocks, he added, “If you have a week or two to prepare, you could probably get her back to what she needed to do.”

In Biles’s case at these Games, however, she did not have two weeks to spare.