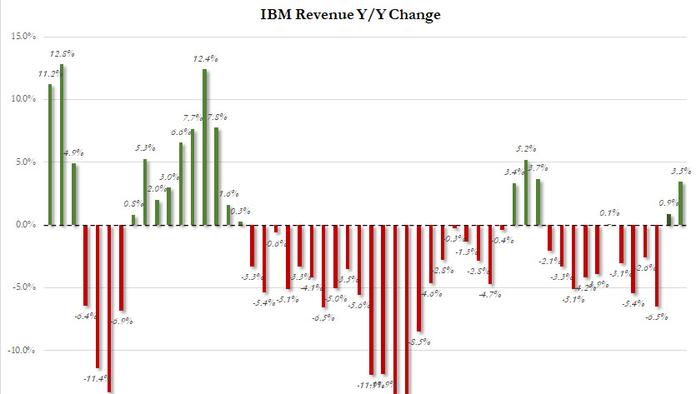 
There was some hope in late 2019 that IBM was finally turning things around: after all, after 5 consecutive quarters of declining revenues, the company had just managed to grow its top-line for the first time since Q2 2018 – when revenue grew by a paltry 0.1% – and only for the 4th time in the past 8 years. Alas those hopes were dashed for much of the pandemic plagued 2020 when the company reported three consecutive quarters of declining revenue.

However, in an extended glimmer of hope for Big Blue which many had started describing as a melting ice cube in recent years, moments ago IBM reported that in Q2 it generated revenue of $18.75 billion, smashing expectations of $18.286BN, a continuation of strong performance reported last quarter when some said that IBM had finally hit rock bottom and was due to rebound.

More importantly, after a modest 0.9% Y/Y improvement in the Q1 top line, Q2 revenues were a solid 3.5% increase compared to Q2 of last year, the biggest revenue increase in three years since Q2 2018. While last year’s earnings were surely depressed by covid, and the base effect provides an artificial kicker to this quarter’s growth, we are confident that the company and shareholders will be delighted with the outcome.

The top-line strength came on the back of solid performance by virtually all groups (only Global Financing revenue missed expectations for the second quarter in a row), with total Cloud revenue of $7.0BN up 13% (down from the 21% increase in Q1).

IBM also reported Q1 revenue growth in three of its five business segments, including Cloud and Cognitive Software, the company’s biggest unit, which saw 6% growth in sales from a year earlier. The Global Business Services unit, which includes hardware and operating systems software, also posted a year-over-year sales increase of 12%.

IBM also said revenue from Red Hat, which it bought in 2019 for $34 billion, gained 20% (normalized for historical comparability) in the first quarter.

IBM also reported that LTM cloud revenue was $27 billion ( vs $26.3 billion as of Q1) up 13% which while high still lags badly similar offerings from Amazon and Microsoft; it was also down notably from the 19% LTM growth rate as of Q1 2021.

The top-line beat also translated into a beat on the bottom line with IBM reporting adjusted EPS of $2.33, just above the estimate of $2.29, and up 7% Y/Y. And here is the actual “beat” in context.

Unlike last quarter, when the company beat modestly on its gross margin, in Q2, adjusted gross margin came in at 49.3%, in line with the consensus estimate of 49.3%

That was the good news. As for the not so good news, there was plenty starting with the observations that IBM’s accounting gimmicks were back front and center, starting with the company’s effective tax rate, which in Q2 was a paltry 14.7%. And while an increase from last year’s 13.3%, it was largely distorted by the -5.6% tax rate in Q1.

Elsewhere, it has long been known that only Watson can calculate IBM’s “one-time non-recurring” charges, which are neither one-time non non-recurring, which meant that the adjusted EPS of $2.33 (which rose 7% Y/Y) was actually GAAP EPS of $1.47, a 3% drop Y/Y.

But wait there’s more, because the GAAP to non-GAAP bridge was, as usual, ridiculous and a continuation of an “one-time, non-recurring” addback trend that started so many years ago we can’t even remember when, but one thing is certain: none of IBM’s multiple-time, recurring charges are either one-time, or non-recurring.

Commenting on the quarter, Chairman and CEO Arvind Krishna noted that “In the second quarter client adoption of our hybrid cloud platform contributed to strong performance in Global Business Services and software and drove improved overall revenue growth. At the same time, we continued to help clients infuse our AI-based technology offerings into their core business workflows. We are pleased with our progress and we remain on track to deliver full-year revenue growth and meet our cash flow objective.”

Maybe… although like in the past four quarters, IBM did not have enough “visibility” into the future to give any guidance for 2021 besides noting that it expects to grow revenue based on mid-July FX rates and still sees adjusted free cash flow of $11 to $12 billion.

And speaking of IBM’s cash flow target, it will have to work extra hard in the rest of the year, because the adjusted Free Cash Flow in Q2 of $1.631BN (which included $595MM in restructuring charge addbacks) was more than $600MM lower than a year ago.

Of course, the actual Free Cash Flow was well less than that at $1.037BN, and since the company paid out $1.467BN in dividends, IBM spent all of its actual free cash flow of $1 billion – and then some – on $1.6 billion in dividends.

“In the first half of the year we increased adjusted free cash flow, invested in strategic acquisitions to strengthen our hybrid cloud and AI capabilities, continued to deleverage and, consistent with our commitment, again increased our dividend.”

Continuing down its balance sheet, IBM ended the second quarter with $8.2 billion of cash on hand (includes marketable securities), down $3.1 billion from $11.3 billion last quarter and down $6.1 billion from year-end 2020 due primarily to acquisitions and mostly debt reduction payments. Debt, including Global Financing debt of $17.5 billion, totaled $55.2 billion, down modestly from $56.4 billion last quarter and down $17.9 billion since closing the Red Hat acquisition. It is notable that IBM continues to pay down debt instead of focusing on acquisitions: the market is well known for punishing prudent balance sheet management and reward reckless spending.

As a reminder, Arvind Krishna, who took over the role of CEO from Ginni Rometty last April, has now headed the company for a little over a year with plans to focus on artificial intelligence and the cloud to revive growth after years of stagnation. Krishna has reorganized the 109-year old tech giant around a hybrid-cloud strategy, which allows customers to store data in private servers and on multiple public clouds, including those of rivals Amazon and Microsoft.

Last October, Krishna spun off IBM’s managed infrastructure services unit into a separate publicly traded company, which will be called Kyndryl and be based in New York. The division, currently part of IBM’s Global Technology Services division, handles day-to-day infrastructure service operations like managing client data centers and traditional information-technology support for installing, repairing and operating equipment. The unit has seen business shrink as customers embraced the shift to the cloud, and many clients delayed infrastructure upgrades during the pandemic. It was one of only two of IBM’s units to see revenue decline in the first quarter, with sales down 1.5%. The spinoff is scheduled to be completed by the end of this year.

Bottom line: while IBM’s core business remains a melting ice cube, in Q2 the company managed to extract some blood from the ice, thanks to some solid performance in Cloud, which led to the biggest revenue increase in three year even if the company’s bottom line was the usual accounting gimmickry meant to beat analyst estimates at all cost. What is more troubling is that now that IBM is in cash paydown mode, it means little to no growth opportunities, and after algos read through the boilerplate, we expect that the modest rebound in stock after hours will be quickly reversed.