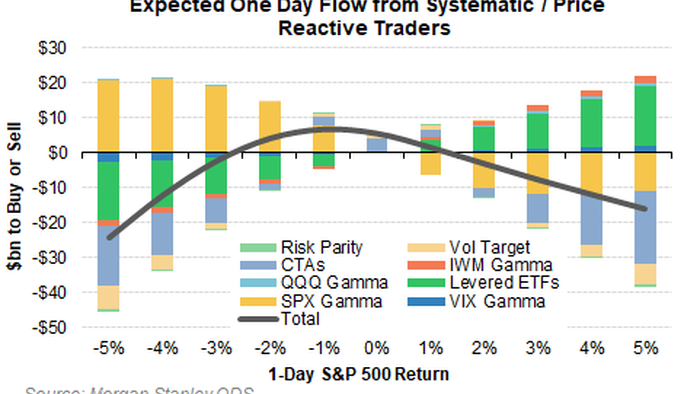 
In the end, the S&P closed down 0.9% which while the biggest one-day drop in three weeks, but as we observed earlier today it could have been much worse had the index breached key support at 4,250 or even the gamma-neutral level of 4,300.

… the liquidation panic quickly faded and conveniently, the usual post-Europe close emerged right on schedule with the S&P spending the rest of the day comfortably in positive gamma territory, with any attempt to dip under aggressively defended.

But who was buying, and who was selling?

For the answer we go to the latest note from Chris Metli, head of Morgan Stanley Quantitative Derivative Solutions, who echoes what we noted, namely that there is strong demand from dealer long gamma and retail, “but if the S&P 500 can break through that support, the tail downside risks from full positioning and forced supply build rapidly.”

While that did not happen today, the question remains: where is that break point between demand and supply? Metli’s answer is that the Morgan Stanley QDS desk starts to get more worried below 4250 as that’s where the bid from dealer long gamma is offset by forced supply from systematic strategies.  This is shown in the chart below.

The good news is that down 1.5% in SPX, which is where we opened and where the immediate BTFD bid emerged, expected flows are still tilted towards demand as today’s actions revealed.

So broken down by entity we have:

Dealers are long gamma and at down 1.5% in SPX they would need to buy ~$10bn of futures today.

Levered ETFs are short gamma and at down 1.5% in SPX they should need to sell ~$5bn of futures (with $2.5bn of that coming in NDX/Tech).

Vol target and systematic strategies have a modest amount to sell same-day in a down 1.5% move so they can be ignored on the margin.  Retail has been buying at an average of about $1.5bn per day recently, but retail demand typically builds in a down market and they could be buyers of $2.5bn on a down 1.5% day if historical patterns hold.

Of course, the above modeled assumptions are programmatic, and as the MS strategist notes, a very important swing factor in the above calculus is what retail does – retail has ramped buying since mid-May (tax day) but on a daily basis their flows can be variable.

Meanwhile, while dealers provide a solid buffer should stocks drop modestly with $7bn of long gamma at 4300 in SPX, that gamma declines rapidly and hits zero around 4175

But while dealers and retail investors are likely to boldly buy any modest dip, one of the key risks on the downside noted by Morgan Stanley is that dealers have a lot of vol to buy in a down market. Specifically, dealer vanna is off its peaks but is still extreme – QDS estimates dealers will have to buy $60mm of vega in a down 5% SPX move.

That demand would put a bid to vol – which manifested this morning as VIX rose nearly 5 points relative to a 1.5% SPX selloff, well above historical norms.

Imbalances in the VIX futures/ETP market could contribute to a vol squeeze as well (although positioning is not historically extreme there).  But a very important dynamic to watch is that as vol rises, dealers have delta to sell delta – for every 1 point increase in fixed strike vols, dealers have roughly $650mm of futures to sell.

There are other downside risks, namely full positioning, with asset manager length in SPX futures back to historical peaks, short interest low, and systematic strategies having large amounts to sell over a week if the selloff accelerates.

Saving the best for later, Metli then goes back to what appears to be the start of all of this – the rates market – where Morgan Stanley’s QDS desk estimates that CTAs are still short bonds and at current yields they have to buy $95bn notional of TY-equivalent duration over the next week, which could continue the bond rally and put pressure on stocks as equity investors fear the bond market knows something they don’t about future growth prospects.

Morgan Stanley’s conclusion speaks for itself: “At current SPX levels QDS does still expect some stabilization in the equity market, but would be quick to get out if price action gets more disorderly on the downside.”