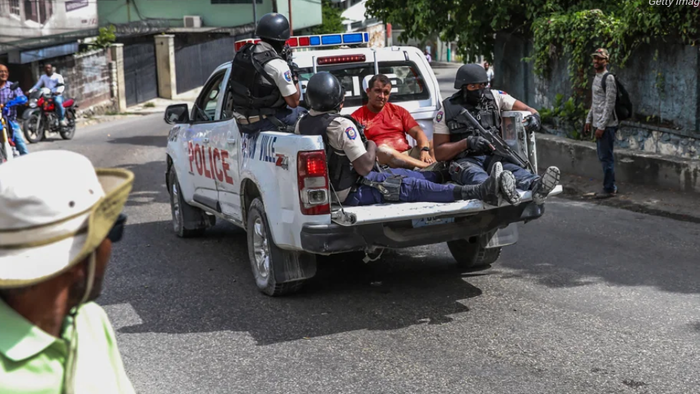 
At least two suspects in the brazen slaying of Haitian President Jovenel Moise were found in the capital of Port-au-Prince by residents who turned them over to the Haitian National Police.

Journalists saw scores of people gather around the men on Thursday, grabbing the suspects by their shirts and the back of their pants, pushing them and on occasion slapping them. People in the crowd said they had found the two hiding in bushes.

Police arrived shortly afterward to arrest the men, who were sweating heavily and were wearing clothes that seemed to be smeared with mud. Officers placed them in the back of a pickup truck and drove away as the crowd ran after them to the nearby police station. –AP News.

Two of the assassins were hauled off to the Port au Prince police station.

Allegedly another suspect was detained by residents.

National Police Director Leon Charles told Radio Metropole that six alleged assassins were arrested Thursday and seven were killed in fierce shootouts across the capital. The men are allegedly responsible for shooting Moise dozens of times and critically injuring his wife.

WaPo reports one of the six people arrested in connection with the assassination is a U.S. citizen of Haitian descent. The paper quoted a Haitian Cabinet minister who said James Solages, a U.S. citizen, has been arrested.

The impoverished Caribbean nation’s future remains uncertain as the prime minister has taken leadership and declared a two-week state of siege in the country.