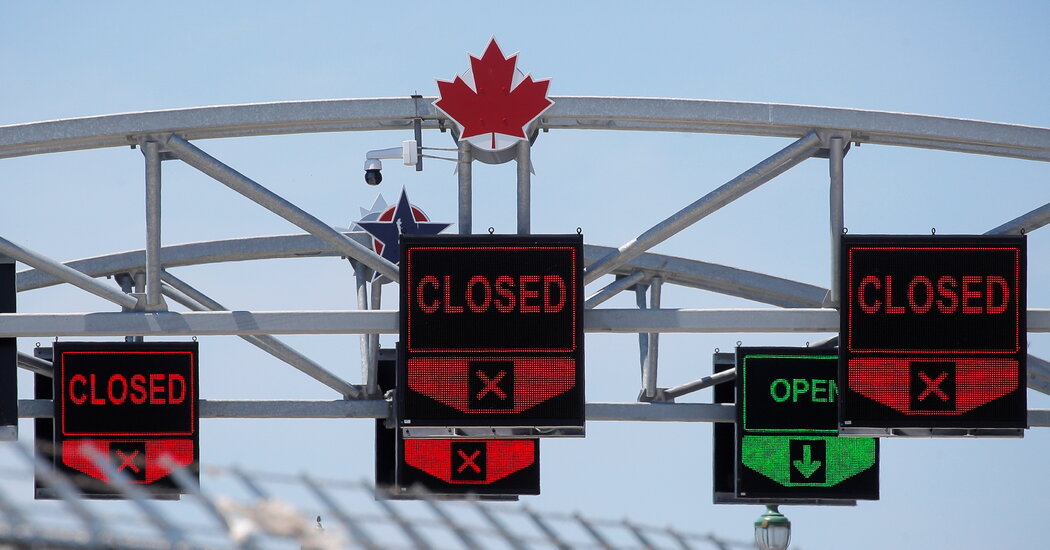 
Americans can now vacation in France, where the one-dose vaccination rate is 49 percent, according to the nonprofit Our World in Data; they can also go to Spain, where the rate is 51 percent, and Greece, 45 percent. But, with very limited exceptions, they still cannot travel to Canada, which, according to one source — the University of Oxford — is leading all countries globally in single-dose vaccination rates.

In mid-June, to the frustration of many on both sides of the border, Canada announced it was extending restrictions on nonessential travel until at least July 21. The ban includes travel via land, air and sea. It will ease entry requirements for fully vaccinated Canadians, permanent residents and some eligible foreign nationals on July 5.

“There’s no other way to say it,” wrote Brian Higgins, the U.S. representative of New York’s 26th Congressional District, on Twitter, who went on to describe the prospect of another month’s delay with a colorful term for barnyard excrement. His district includes Buffalo, just across the border near Niagara Falls, a popular frontier for travelers going in both directions.

Senator Chuck Schumer of New York is among the American politicians pushing for a swifter reopening for those who are vaccinated and have personal or commercial ties to Canada. “I explained to Ambassador Hillman how mind-boggling it is that many New Yorkers are free to travel to Europe now, but even those fully vaccinated can’t even drive a few miles north to Canada to their homes, businesses, stores, families, and properties,” he said in a news release detailing a call with the Canadian ambassador to the United States, Kirsten Hillman, on June 21.

President Biden and Prime Minister Justin Trudeau of Canada were expected to discuss the issue at the G7 summit in Cornwall, England, earlier in June. At a news conference there, Mr. Trudeau said that they had, though his resolve apparently remained unchanged, noting that “each of us always will put at the forefront the interests and the safety of our own citizens,” according to Reuters.

Here’s what we know about the border closure with Canada.

Why does the Canadian border remain closed?

The border with Canada has been closed to nonessential travel since March 2020 to prevent the spread of the coronavirus. Prime Minister Trudeau has long expressed a goal of 75 percent vaccination nationally with the first dose and 20 percent full vaccination before the border is reopened.

The Canadian government has cited the spread of more transmissible variants of Covid-19, such as the Delta variant, as a reason for its caution.

“Even a fully vaccinated individual can pass on Covid-19 to someone who is not vaccinated,” Mr. Trudeau said on June 18, addressing the reasons for the extension of the border closure. “That means we have to really make sure that not only people who are fully vaccinated can travel, but the communities to which they will return are not at risk, because even though they are protected from hospitalization, the people around them might not be.”

When will the border fully reopen?

The government has announced it will reopen the border in phases. The first goes into effect July 5, allowing fully vaccinated Canadians returning home to skip some previous quarantine requirements and avoid the otherwise mandatory test on day eight in the country. Those travelers must file their travel and vaccination history at the website and app ArriveCAN. Vaccinated travelers who qualify must still submit a negative Covid-19 test taken up to 72 hours before departure and submit to another test on arrival.

The government is expected to announce an update to its current policy before July 21.

“We recognize people are anxiously awaiting the reopening of the border,” said Bill Blair, Canada’s minister of public safety and emergency preparedness, at a news conference last week, noting that the aim is to reopen the border “in the coming months.”

Who can enter Canada?

In addition to Canadians, permanent residents and people registered under Canada’s Indian Act, some foreign nationals are permitted to enter Canada, including an immediate or extended family member who is staying in Canada for 15 days or more. This covers the mandatory 14-day quarantine period.

Discretionary travel, including tourism, remains prohibited. Before the pandemic, Americans accounted for about 15 million of the 22.1 million overnight international visitors to Canada, spending an estimated 11.1 billion Canadian dollars of the 23 billion dollars for all international visitors in 2019. Most Americans traveled by land; about 4.8 million arrived via air.

How many people cross the U.S.-Canada land border normally?

According to the Bureau of Transportation Statistics in the United States, some 10.5 million people crossed the border by personal vehicle at Buffalo Niagara Falls, the busiest land crossing with Canada, in 2019 compared to 1.7 million in 2020.

For border towns like Buffalo and Detroit, and their Canadian counterparts, the restrictions have separated families and friends and devastated local economies. Sandy Pearce, 61, an American living in Fort Erie, Ontario, just across the Niagara River from Buffalo, has been holding peaceful protests every Sunday afternoon at the Peace Bridge, which connects the two countries.

“The government’s been saying you have to follow the science,” she said of the Canadian campaign to get citizens vaccinated. “If they’re vaccinated, Americans coming to Canada are not a threat anymore.”

“We have a blended community and you go back and forth on a daily basis,” said Ms. Pearce of Fort Erie, whose 93-year-old father lives alone on the American side of the border. “Canada doesn’t seem to understand.”