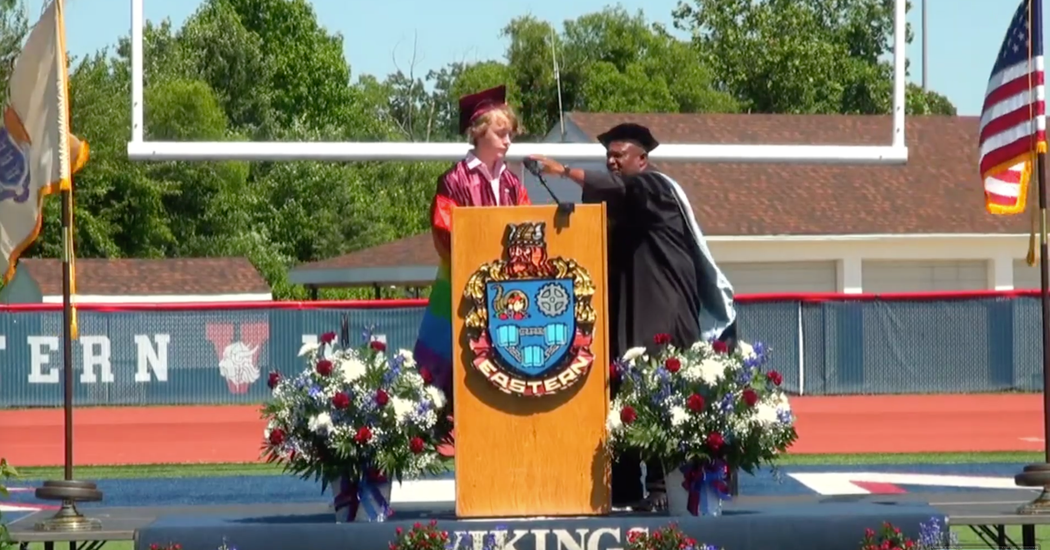 
Less than a minute into Bryce Dershem’s valedictorian speech on June 17, the microphone cut out. He had just told the audience at his New Jersey high school’s graduation ceremony that he came out as queer in his freshman year.

When he made that revelation, the principal, Robert M. Tull, went to the back of the stage and appeared to unplug some cords, a video from the ceremony shows.

Suddenly, Mr. Dershem, 18, was silenced. Mr. Tull walked onstage and took the microphone from its stand.

When the principal took the microphone, he also took Mr. Dershem’s prepared remarks.

Mr. Tull pointed to another copy of the speech on the podium that did not have any references to sexuality or mental health.

A replacement microphone was brought to Mr. Dershem, but at that point, he said in an interview on Saturday, he was frozen. Then his classmates at Eastern Regional High School in Voorhees Township, N.J., cheered for him to continue his speech.

“As it was happening, passion was surging through my veins that, yes, I need to give this speech,” he said, “because this is the exact kind of stigma that I want to fight against.”

Mr. Dershem knew every word of his own version of the speech, because he had been working on his remarks for a month.

He spoke about how much he went through before he stood on the graduation stage.

“Beginning September of senior year, I spent six months in treatment for anorexia,” he said in the speech. “For so long, I tried to bend and break and shrink to society’s expectations.”

Mr. Dershem wanted to emphasize to students that their identities are valid, he said.

“From a formerly suicidal, formerly anorexic queer,” he said, he wanted the students to know that one person could save another person’s life.

When he arrived at the ceremony, Mr. Dershem wore a pride flag over his robe. A school administrator wanted him to take it off, but he refused. During the speech, Mr. Dershem suspected the principal was trying to pretend that there were technical difficulties.

Mr. Tull had read Mr. Dershem’s speech before the ceremony and wanted Mr. Dershem to deliver the version that the school administration had approved.

The principal and Mr. Dershem had been debating the contents of the speech for weeks, Mr. Dershem said. The student sent the principal three drafts, he said, because Mr. Tull said his speech was not broad enough for his 500 fellow seniors.

Mr. Tull did not respond to a request for comment on Saturday. The high school is in Voorhees, a township of about 30,000 people, about 20 miles from Philadelphia.

Robert Cloutier, the superintendent of the Eastern Camden County Regional School District, said in a statement that the district had not asked any students to remove mentions of “their personal identity” from their speeches.

The New York Times reviewed the high school’s live-streamed video of the ceremony. Mr. Dershem’s father reposted a clip of his son’s speech on YouTube.

Just days before the ceremony, Mr. Dershem said the principal gave him an ultimatum: He could revise his speech, or he would not be allowed to speak at all. He changed his speech but the principal still did not like it, the student said.

“I felt like I was faced with this choice where I could either honor all the belief systems and virtues that I cultivated,” Mr. Dershem said, “or I could just follow the administration.”

Mr. Dershem talked over the decision with his family and decided that he was going to give the speech he always wanted to.

When his speech was over, the audience gave him a standing ovation. A woman thanked him afterward.

“She told me her son hadn’t survived the pandemic due to mental health struggles and she started to cry,” he said. “I thought, This was the one person I made feel less alone. And I knew I did the right thing.”

“I probably watched the speech I don’t know how many times since then,” Michael Dershem, 56, said. “I’m a pretty tough guy, but, you know, I break down every time I watch it.”

Gov. Phil Murphy of New Jersey said on Twitter on Saturday that he was proud of Mr. Dershem for “speaking truth to power, and for your resilience and courage.”

Mr. Dershem is getting ready to move to Massachusetts in the fall. He will be a student at Tufts University, where he plans to promote the rights of women and L.G.B.T.Q. people.

“I’m so happy to know that people are watching this speech,” he said. “I hope they believe in themselves more and feel less alone in their fight.”