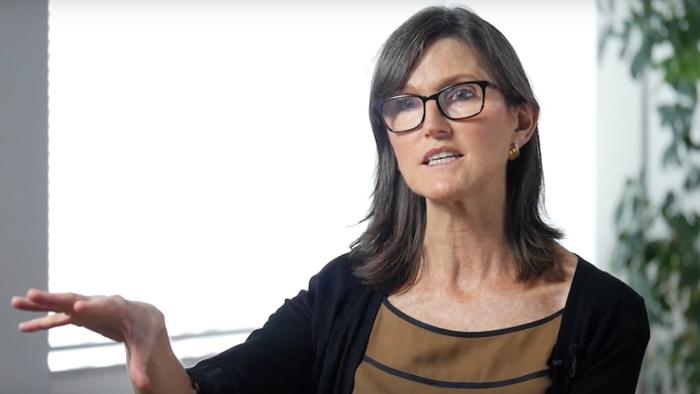 
The gene-editing breakthrough announced Monday by Intellia Therapeutics and its partner Regeneron sparked another rally for biotech stocks, but it also cemented a comeback for Cathie Wood, founder of Ark Investment Management, which saw the AUM of its family of actively-managed ETFs explode over the past year thanks to her bets on crypto, Tesla, Shopify, Zoom, Palantir, Roblox.

Ark is the largest, or second-largest, shareholder of the handful of Crispr gene-editing technology companies that saw their shares rally hard on the news – including Crispr Therapeutics, Intellia, Editas Medicine and Beam Therapeutics – and the news sent shares of the Ark Genomic Revolution ETF up 3.3% on Monday while Ark’s flagship Ark Innovation fund rallied 3.8%.

The rally cemented a comeback of sorts for Wood. After a rough few months, Ark’s flagship fund has now rallied more than 25% off its May low.

BOOM: ARK files for a bitcoin ETF (in collab with 21Shares). This would be bitcoin ETF filing #12. pic.twitter.com/iaWAdSo9v1

The partnership makes sense, since not only is Wood is on the board of 21Shares, but the firms have a similar ethos. If approved, the ETF would greatly improve 21Share’s name recognition while also giving it a foothold in the US. Ark launched one of the first ETFs in the US to offer exposure to bitcoin via shares of the Greyscale bitcoin trust.

Despite the SEC’s repeated refusals stemming back several years, competition for launching the first ETF has intensified this year, even as prices for crypto have come off their highs. Greyscale, which launched bitcoin and ethereum trusts, the closest thing the US has to crypto ETFs, has hired a whole ETF team, and Fidelity back in March became the largest asset manager so far to ask for permission to launch a bitcoin ETF.

While Wood’s entry adds to the excitement, Balchunas says he’s becoming less optimistic about the prospects for a crypto ETF to be approved, given the reservations of many powerful Democratic politicians, as well as Biden’s SEC chairman, Gary Gensler, who has spoken out about the risks of abuse, fraud and manipulation tied to bitcoin.

While this def adds to excitement, I have recently become less bullish on bitcoin ETF approval the more I come to think SEC has hands tied by bigger forces in US gov. Thus, I think ETF may be in holding pattern until there’s some kind of reg framework or crackdown on crypto. pic.twitter.com/VDHsRk7CYt

Working his way through the prospectus, Balchunas reported that the fees on Wood’s proposed BTC ETF are surprisingly high: nearly a full percentage point.

Also interesting pretty sure this is this is first bitcoin ETF filing with a fee in the initital filing and it is 95bps, so gives idea of what the others may come in at. (ht @maybebullish ) pic.twitter.com/8lqMw7ftKT

If Wood has her druthers, her ETF will track the S&P’s bitcoin index, which uses Binance, Bitfinex, Bitflyer, Bittrex, Bitstamp, Coinbase Pro, Gemini, HitBTC, Huobi, Kraken, KuCoin and Poloniex, a reasonable cross-section of the biggest exchanges in the West and the East.

Looks like this will track S&P’s bitcoin index which uses the below exchanges: pic.twitter.com/eqp354Nvs0

Wood, a longtime crypto bull, remains unphased by the selloff in bitcoin and other popular cryptotokens. During a recent interview with Bloomberg TV, Wood said bitcoin was “on sale right now,” but has not necessarily reached its bottom. Wood still expects bitcoin to eventually reach $500K. “We go through soul searching times like this and scrape the models, and yes our conviction is just as high,” Wood said during the interview.

Gensler seemed to put a damper on the prospects for a bitcoin ETF when he said in an interview with CNBC earlier this month that crypto is a “speculative” asset class that that investors should be wary that there’s not oversight of these markets.

However, we doubt that Wood – who has become a celebrity in her own right over the past year and now has tremendous cache both on Wall Street and in Washington – would have even bother applying if she didn’t think there was some chance the ARKB ETF might be approved.