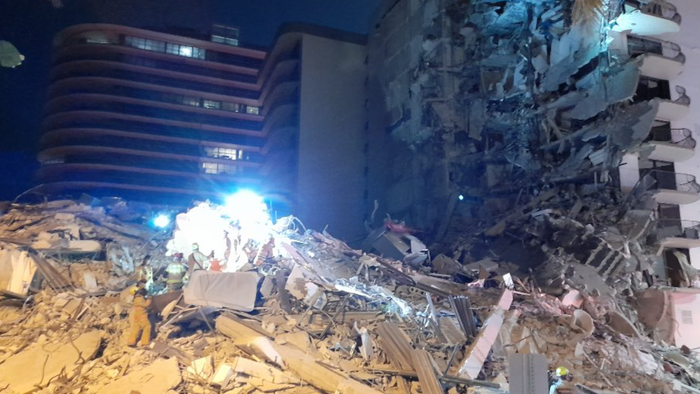 
A shocking report from Miami, Florida, early Thursday, of a condo building collapse, where at least nine people were taken to various local hospitals, according to CBS Miami.

Miami-Dade Rescue Fire tweeted that an 80 unit condo building in a 12-story tower in the town of Surfside, part of Champlain Towers, experienced a “partial collapse.”

Reasons for the building’s collapse are not yet known.

Here’s a skycam footage of the collapse.

Skycam footage captures partial collapse of a multi-story condominium building in #Miami, FL around 2 a.m. It is unknown how many were in the building at the time of collapse. Still an active seen. pic.twitter.com/y92CqlQrhj

Scenes on the ground are stunning.

Update on #Miami: A building partly collapses near Miami, #Florida
🔺There is an enormous emergency response near Miami Beach.
🔺The collapse happened near 88th St & Collins Ave
🔺We haven’t heard of reports of injuries or fatalities at this time
pic.twitter.com/Mad3E15Z3u

“They are able to rescue some people….but I heard some screams.” Off camera this resident of Champlain Towers tells me, “I lost a lot of friends- part of Bldg is pancaked.” @MiamiDadeFire sent *80* units to #miamibuildingcollapse in what is shaping up to be horrific @NBCNews pic.twitter.com/AMyq1Fc5Gc

Here’s the video from within the building.

@AgendaFreeTV I am a resident of one of the condos on the side of the collapse. This is a video from my camera footage inside from the start of the collapse until the lose of connection (I was away from the building today). Towards the end, you hear the structure failing pic.twitter.com/UzBJQogUxp

… and this all plays into aging private and public buildings and infrastructure across the country are in need of serious repair.

*This story is developing.