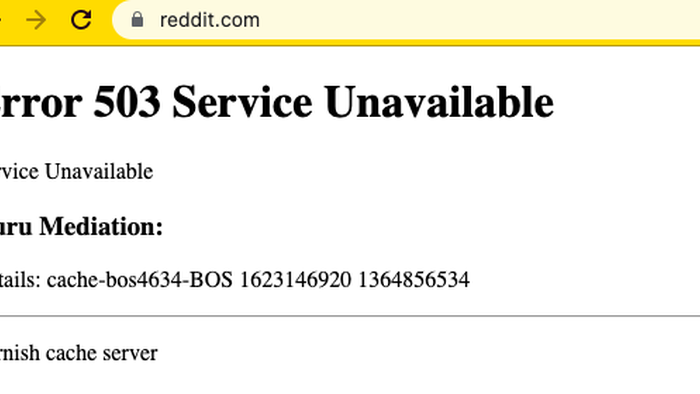 
Update (0736ET): After an hour of websites and apps worldwide went dark, many are coming back online around 0730 ET. The core problem was an “issue” identified on the Fastly CDN (content delivery network) network.

Popular websites such as Twitch, Pinterest, HBO Max, Hulu, Reddit, Spotify, which Fastly runs a content delivery network to push data around the internet, went down around 0600 ET. With so many websites relying on Fastly’s technology to act as a high-level website and application hosting service to serve millions of users, the internet breaks when their servers go down.

There are many similarities between this outage and an issue with Cloudflare last year.

The point here is to have the entire internet rely on a single point of failure like Fastly and Cloudflare could be something hackers may exploit.

Update (0708ET): Fastly issued a new update that reads: “The issue has been identified and a fix has been applied. Customers may experience increased origin load as global services return.”

Update (0650ET): Fastly has identified the issues and a fix is being implemented.

How long until the Russians are blamed?

Update (0646ET): Many websites are down this morning due to a CDN failure. The issue appears to be originating at the Fastly CDN network. We listed websites currently experiencing problems in an earlier update, such as Reddit, Twitch, PayPal, etc…

“Fastly is one of a number of high-level website and application hosting services that large enterprises use to serve content to millions of users simultaneously. Rather than hosting all website content on a single set of servers in one location, Fastly puts cloud infrastructure in dozens of locations to let people download from a server closest to them,” Bloomberg said.

Failures are rare, but when they do happen, there’s widespread impact.

Downdetector users report Reddit is experiencing issues and or outages nationwide. Besides Reddit, there are other websites that are down.

A search for “Reddit.com” comes up with “Error 503 Service Unavailable”

E-mini S&P500 futures have slumped on the news.

This is terrible news for wallstreetbets traders waking up Tuesday morning, unable to pump meme stocks like AMC and GME.