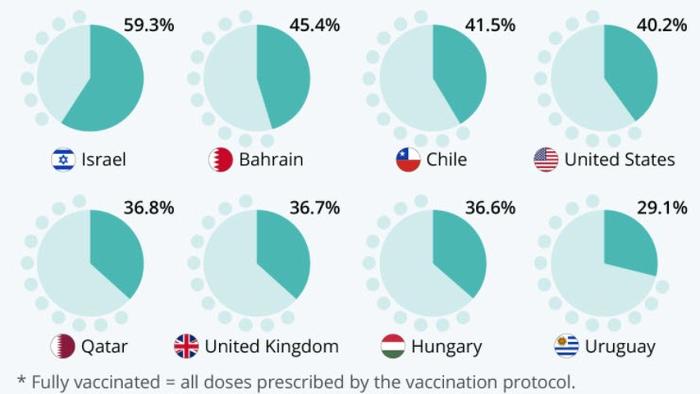 
Scientists initially estimated that 60 to 70 percent of a population would have to acquire resistance to Covid-19 in order for herd immunity to take effect, a threshold that has been revised upwards since the start of the year with 80 to 85 percent quoted in some cases.

As Statista’s Niall McCarthy notes, the race towards full vaccination is well underway and Israel has the highest share of its population fully jabbed, according to Our World in Data.

Despite the ever-higher immunity threshold discussed by scientists, Israel’s Covid-19 case count started to tumble when 40 percent of its population received at least one jab and now 59.3 percent of its inhabitants are fully vaccinated. The country’s reproduction rate has been around 0.5 in recent weeks and it appears to be on track to emerge from the pandemic, suggesting that initial herd immunity estimates carried some accuracy.

With 45.4 percent of its inhabitants fully vaccinated, Bahrain comes second on the list.

In the United States, 40.2 percent of people have been fully vaccinated (though do not forget that almost half of unvaccinated Americans have natural immunity from prior infection).

In this case, full vaccination refers to all doses prescribed by the vaccination protocol with data only available for countries reporting the breakdown of their doses.

As Scott Morefield wrote recently, Blue-state lockdown-lovers drunk on their own power like Democratic Michigan Gov. Gretchen Whitmer who insist on a 70 percent vaccination rate in order to ease up on mandates and restrictions are ignoring the science completely in order to hold their people hostage to an unobtainable, unnecessary goal.

Dr. Marty Makary, a surgeon at Johns Hopkins Hospital debunked the desire among some health officials, sometimes referred to as “zero COVID,” that COVID-19 can be eradicated completely.

Well, unfortunately, we have this perception now that’s being created by some public health leaders that we need to reach total eradication. We’re not gonna get to total absolute risk elimination. That is a false goal and quite honestly it’s being used now to manipulate the public. We heard today again from our public health leaders that if we get to 70% vaccination, then we can start seeing restrictions removed. That’s dishonest. Most of the country is at herd immunity. Other parts will get there later this month. San Francisco had 12 cases yesterday, most asymptomatic. What do you call that? I call that herd immunity. And I think what’s happening is our public health leaders are dismissing natural immunity from prior infection, which changes the path to get to more population immunity. It invokes mandates, it means kids may have to get it and it demonizes those that are hesitant rather than respecting their decision.

Indeed, you don’t have to have a medical degree to know that the formula for herd immunity has always been vaccinated plus natural immunity, but then again, when have Democrats ever been good at math?