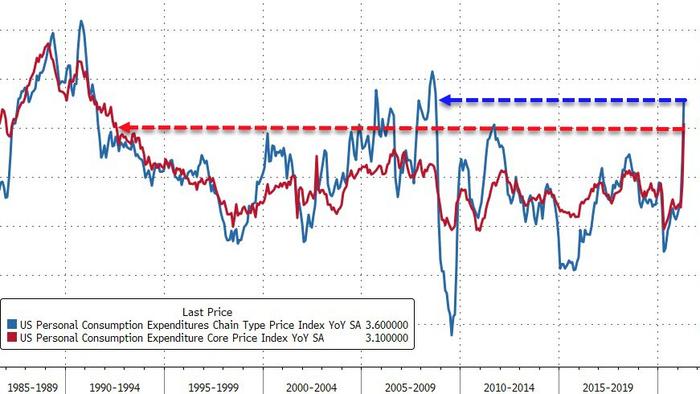 
While Americans’ income and spending is normally the headline-making data, this morning’s release will focus all eyes on The Fed’s favorite inflation indicator – the PCE Deflator.

The headline PCE Deflator rose 3.6% YoY, the fastest rate or price increases since 2008.

Even more notably, the Core PCE Deflator soared 3.1% YoY (hotter than the +2.9% YoY expected) and the hottest print since May 1992…

However, back in income and spending land, the picture was very mixed with incomes crashing 13.1% MoM and spending rising just 0.5% MoM after the stimmies run dry …

The consumer buffer is almost gone: personal savings rate plunges by 50% as Americans do what they do best: spend their savings.

So – let’s summarize – prices are rising at their fastest pace in almost 30 years and incomes just plunged by their most ever!