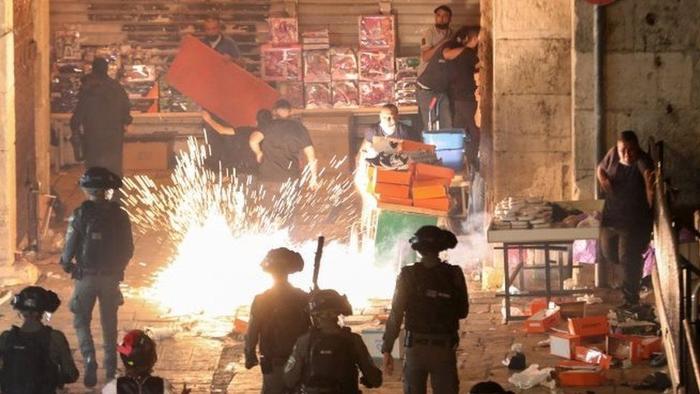 
The weekend of unrest in Jerusalem and the West bank is breaking out into broader conflict and rocket fire between Israel and Gaza, with reports of at least 30 rockets fired toward Jerusalem on Monday.

Incoming rocket sirens have been activated in multiple areas across Israel including Jerusalem and the Beit Shemesh area, which lies west of the city. Early reports suggest multiple of the rockets were intercepted by the Israel Defense Force’s (IDF) Iron Dome system, however at least one inhabited building has been reported hit outside of Jerusalem. Israel has initiated airstrikes on northern Gaza.

Video of the Iron Dome interceptions over Sderot a short while ago pic.twitter.com/1jxcvNghtS

Hamas has claimed responsibility for the fresh rocket attacks after Israeli security forces refused an ultimatum to withdraw from Temple Mount and the Sheikh Jarrah neighborhood. Palestinian Islamic Jihad has also claimed to have fired at least 30 rockets from the Gaza Strip.

The weekend had witnessed Israeli police forcibly push out Muslim worshippers from the al-Aqsa and Temple Mount areas, which intensified clashes.

Massive escalation now in Jerusalem as we can hear rocket sirens and booms and crowds cheering pic.twitter.com/ZRJ0M7uXtQ

Early social media videos show there have been multiple direct impacts in residential areas of Jerusalem:

Medics called to respond to a direct impact in Kiryat Anavim pic.twitter.com/qvWcibg6PN

More footage from the Gaza rocket impact near Jerusalem pic.twitter.com/rGiiusGrxw

In response the IDF has sent reinforcements to muster near Gaza, fearing a escalation, according to The Jerusalem Post, after it was earlier reported on Sunday that Israel’s military deployed an additional three battalions to the West Bank also as the East Jerusalem Sheikh Jarrah neighborhood is a flashpoint after police began evicting dozens of Palestinians from their homes and Jewish settler groups began moving in.

There had already been days of tit-for-tat attacks focused in Jerusalem, reportedly resulting in hundreds of Palestinians wounded and arrested, particularly related to the ongoing controversial ‘Jerusalem Day’ which involves Israeli-flagged Jewish parades marching through Muslim and Christian neighborhoods.

Video released by the police shows Palestinians throwing rocks at the car before it crashes into a crowd. The crowd then rushes to the car and continues to throw objects towards it. pic.twitter.com/Q5rsbQ51GM

The march will go ahead as planned, with tens of thousands of Israelis set to head into occupied East Jerusalem’s Old City

He [Abu Obeida, spokesman for Hamas’ military wing] threatened more attacks if Israel again invades the sacred Al-Aqsa compound or carries out evictions of Palestinian families in a neighborhood of east Jerusalem.

More than a dozen tear gas canisters and stun grenades landed in the Al-Aqsa Mosque, one of Islam’s holiest sites, as police and protesters faced off inside the walled compound that surrounds it, said an Associated Press photographer at the scene. Smoke rose in front of the mosque and the iconic golden-domed shrine on the site, and rocks littered the nearby plaza. Inside one area of the compound, shoes and debris lay scattered over ornate carpets.

And now fires at the sacred Temple Mount area?…

The Temple Mount is now literally ablaze as a tree catches fire at the holy site.

Police say it appears to have been started after people launched fireworks at it. pic.twitter.com/gZnD2sojgK

Chaos is breaking lose with many commentators noting tensions are on knife’s edge, to the point we are likely about to witness a new Palestinian Intifada.