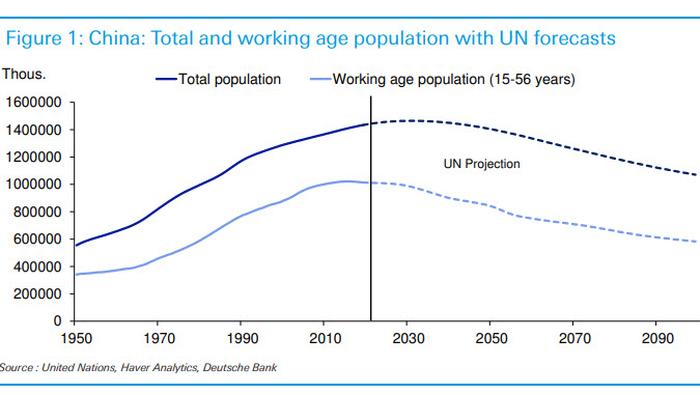 
Earlier this week, we highlighted an interesting article in the FT this according to which China’s population was set to decline for the first time since the 1950s when the national census data is released soon. However, in response to the report which prompted widespread speculation over implications of this demographic inflection point, the Chinese National Bureau of Statistics (NBS) best known for faking every possible piece of data, released a statement this morning saying that the population continued to grow in 2020 ahead of the official release. Watch for 2016-19 revisions though.

So although a decline was avoided, the NBS recently said that China’s demographics “has reached an important turning point”.

Here Deutsche Bank’s Jim Reid reminds us that using UN population forecasts, China’s population is predicted to peak in 2031 at around 2% above 2019 levels, so expectations were already that the population was plateauing. With normal margins of error the peak could come notably before (maybe even now) or indeed after. For the record, on the UN’s data, India’s population is expected to climb above China’s in 2027 – to be the largest in the world – and will be 17% above by 2050.

More interestingly, the working-age population peaked in China around 2015 (2013 using NBS data) having surged in the globalization era. In the forty years to 2015 this increased c.97% but is predicted to fall c.-12% over the next 20 years.

As Reid concludes, we can only speculate whether this changes the global inflation outlook. Over the last few decades the surge of global workers and the integration of originally very cheap Chinese labor into the global system has had a very depressing impact on inflation. But as workers become relatively more scarce across the world, including the now much higher-paid Chinese, not to mention with countless supply chains permanently frayed or broken, will there be more pricing power for labor in the years ahead?