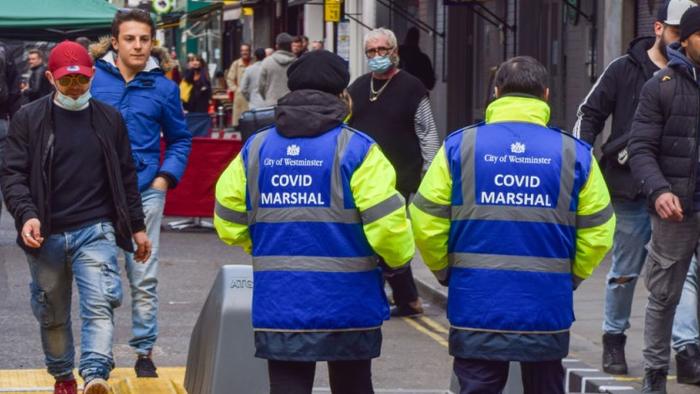 Government councils in the UK are hiring COVID Marshals to patrol streets from July until the end of 2023, despite the fact that all lockdown restrictions are supposed to end in June.

“A new army of Covid Marshals is being recruited for roles that could last until 2023 despite Government plans to lift all remaining restrictions on June 21,” reports the Telegraph.

“Councils around the country are advertising jobs that do not begin until July – several days after the supposed freedom day.”

One example is Hertfordshire County Council, which is “offering a contract of up to £3 million to firms that can supply 60 marshals from July 1 until January 31 next year.”

“The contract comes with a possible one-year extension, meaning marshals would still be patrolling until 2023,” states the report.

The Marshals will be tasked with ensuring “compliance” and helping the public understand “regulations and guidance,” despite the fact that all regulations are supposed to be terminated in 8 weeks time.

“We know that the virus is still circulating and will be for some time. We know from last year that numbers of infections can change rapidly, and Government are very clear that we should plan in case a third wave arises. It would be a dereliction of duty not to prepare for a third wave,” said Jim McManus, director of public health for Hertfordshire County Council.

Critics have accused the government of wasting taxpayer money by allowing councils to use government grants to fund the program.

“To start hiring people based on the situation we faced last year, before we had rolled out the vaccines, does seem to be a waste of public money,” said Mark Harper MP, Tory chairman of the Covid Recovery Group.

The fact that COVID Marshals will be patrolling the streets beyond June once again illustrates how the timetable to lift restrictions is completely phony.

Just like the UK government promised for months that it wouldn’t introduce vaccine passports while secretly funding their creation, the state has been caught lying yet again.

In all likelihood, fearmongering over a “third wave” of the virus, despite the UK vaccinating virtually all of its vulnerable population, will be used to reintroduce lockdown at the beginning of Autumn.