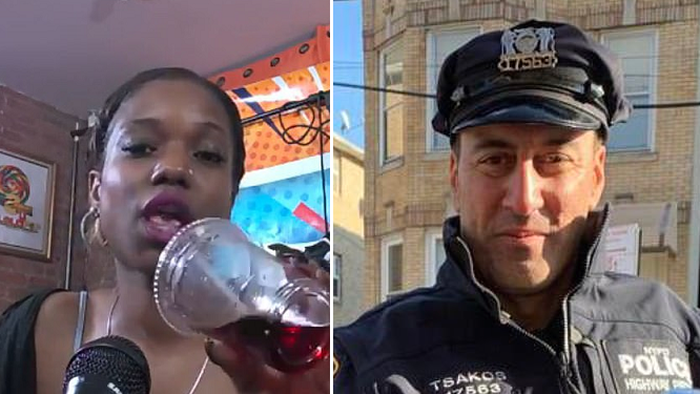 
A New York woman was arrested early Tuesday morning after striking and killing a veteran police officer in a New York City hit-and-run, according to the Daily Mail.

In a nearly two-hour Facebook Live stream following the trial of ex-cop Derek Chauvin, 32-year-old Jessica Beauvais could be seen taking shots of vodka and saying “fuck the police” just hours before plowing into 43-year-old NYPD Highway Officer Anastasios Tsakos, 43, on the Long Island Expressway around 2am Tuesday morning while driving her Volkswagen on a suspended license.

Taskos was redirecting traffic from a fatal car Queens accident at the time when Beauvais allegedly aimed for Taskos and struck him head on – killing the married father of a three-year-old son and six-year-old daughter. The 14-year veteran of the NYPD was pronounced dead at a nearby hospital.

“We stand here this morning reminded once again, in law enforcement, there is no such thing as a routine job,” said NYPD Commissioner Dermot Shea, adding “We stand here devastated and trying to pick up the pieces of what is a shattered home and a shattered NYPD family.”

Following the accident, Beauvais reportedly sped off with a ‘completely shattered’ windshield before she was arrested by police.

Beauvais, who says she has a 13-year-old son in the video, offered a tearful apology for Tsakos’ death as she was led out of the NYPD’s 107th Precinct in handcuffs on Tuesday afternoon. ‘I’m sorry that I hit him and that he’s dead,’ she sobbed.

She is set to be arraigned on two counts of vehicular manslaughter, and reckless endangerment, leaving an accident resulting in death, fleeing an officer in a motor vehicle, and other charges, including driving while intoxicated. –Daily Mail

“This week we are going to talk about the ignorance that was the Derek Chauvin trial – or the ignorance that is essentially just is this f**ing justice system,” Beauvais said at the beginning of her 1 hour 51 minute Facebook Live video as part of her Face the Reality radio show. “Police say an oath and in that oath they say an oath that they are not supposed to be afraid of that position and that is literally in the rules.”

She then proceeded to say that police officers are “signing up for potential death like in the army,” and that it’s “part of the job” that people “might try to fucking kill you.”

After which she killed a police officer, allegedly of course.

“‘Like (hip hop group) NWA say about the police – if you’re going to kill me, at least I get to take someone with me,” she told her audience, adding “I’m one of those people. If I’m going to go, someone is coming.”