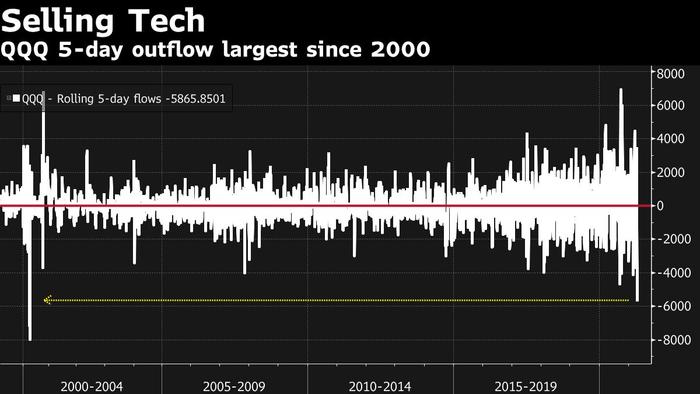 
The recent surge in hedge fund selling (as discussed last week in “Goldman Prime: Hedge Funds Sell Stocks 7 Of The Last 8 Days; Short Squeeze Coming“) appears to be accelerating, reinvigorated by last week’s dismal Netflix earnings and guidance, and as Bloomberg first pointed out has spilled over to the broader tech sector resulting in a broad liquidation before the sector’s heavyweights report this week.

The $161 billion QQQ ETF – a Nasdaq proxy darling of retail and institutional investors alike – has bled nearly $6 billion over the past five days in its worst stretch since the bursting of the dot-com bubble in 2000, according to data compiled by Bloomberg. It helped drag QQQ to its first weekly drop in over a month.

To be fair, with the exception of the ugly NFLX results, earnings season has hardly been disappointing for tech, with the few tech companies that have already reported surprising on earnings by 18% on average. And yet, as we warned, their stock prices have barely moved higher in the following 24 hours, as they were already priced to absolute perfection following the recent surge. It’s also why the pressure is on the rest of the FAAMG megacaps to deliver, including Amazon.com, Apple and Microsoft, which are all scheduled to report earnings next week.

“With earning season starting to heat up, especially for the tech sector next week, it is likely that the expectations for technology companies may be too high,” said James Pillow, managing director at Moors & Cabot, echoing precisely what we said two weeks ago. “It’s early still, but just look where the earnings surprises are coming from: materials, energy, and financials, all about 80% or higher. Money will follow performance — and the performance is coming from those sectors.”

ETF flows have already been reflect the shift, with financials-tracking ETFs attracting $15.7 billion in inflows so far in 2021, while energy and materials funds have absorbed $14.4 billion and $4.9 billion, respectively according to Bloomberg. Meanwhile, tech ETFs have posted inflows of just $3.9 billion year-to-date, after QQQ alone took in $16.7 billion in 2020 – the most since 2000. Much of that inflow is now reversing as investors are looking for the next catalyst to push tech stocks higher… or failing that, the next greater fool.