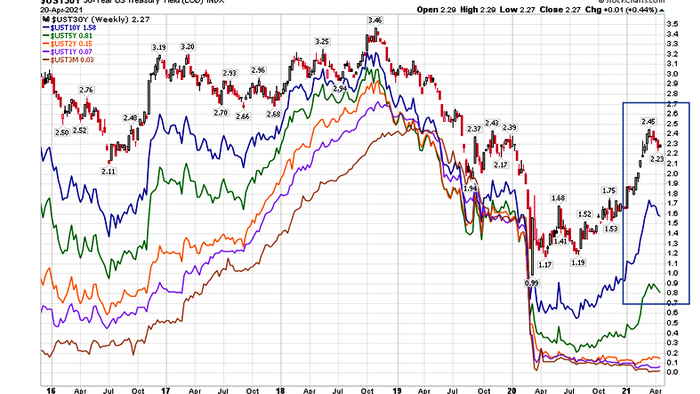 A US treasury yield curve trend change appears to be underway. The move has strong implications in a number of ways.

It’s Not the News Matters

It’s not the news that matters, it’s the market’s reaction to it.

Yields had been inching lower. Then last Thursday there was a sudden large drop in yields on the 30- 10- and 5-year treasury yields.

A: Retail sales surged in a blowout beating all expectations.

The consensus estimate was 5.6%. Instead we saw a 9.8% surge in an enormous blowout.

When I saw the retail sales numbers, I quickly looked at bonds and gold.  My expectation was that yields would head higher and gold lower. Instead the reverse happened.

Technically speaking, gold double bottomed over the past two months.

Then yields fell and gold rose smack in the face of the strongest retail sales beat in history.

Brian – Note the reaction in bonds today smack in the face of massive retail sales beat.

Retail Sales, What’s Hot? What’s Not? And What About Amazon?

Look at how Covid-19 made winners and losers in 5 select categories. Three charts.

Also some comments on disinflationary forces in play.

I asked yesterday if I could share his response. Here goes.

It seems the turn over the past few weeks may be significant. The dollar appears to have topped in late March, and now yields are falling too.

It is too soon to say what the 10-year Treasury yield will ultimately do with the support/resistance between 1.5-1.6%. That area defined the low end of the trading range in the decade after the financial crisis, and this is the first test from below.

The rise this year slightly above resistance may just end up be a technical clear out of the shorts. We’ll see. Overall sentiment seems to regard lower yields as a near impossibility.

Gold, however, is acting like we’ve likely seen the highest real yields, regardless of what happens at 1.5-1.6%. It looks as if the precious metals correction from the high last August may be over.

I had a different sort of exchange with a close friend who responded “Gold has been in the dumps for a year.”

To which I replied, “Well, when do you want to buy it?”

Comments on Buying and Selling Gold

Long time readers know that I have never issued a sell recommendation on gold. Call me a gold “hodler”.

For those unfamiliar with “hodl” it is bitcoin slang for buy and hold. I have be hodling gold since it was $300 or so. Occasionally I trade some for silver or even equities and have written about gold-to-silver swaps a couple of times.

Although I have not said “sell”, on some occasions I do step up to the plate and suggest “now is a good time to buy gold”.

This is one of those times.

And with nearly everyone looking for stronger inflation and higher bond yields please consider The Fed Wants to Stimulate Bank Lending, Charts Show the Fed Failed