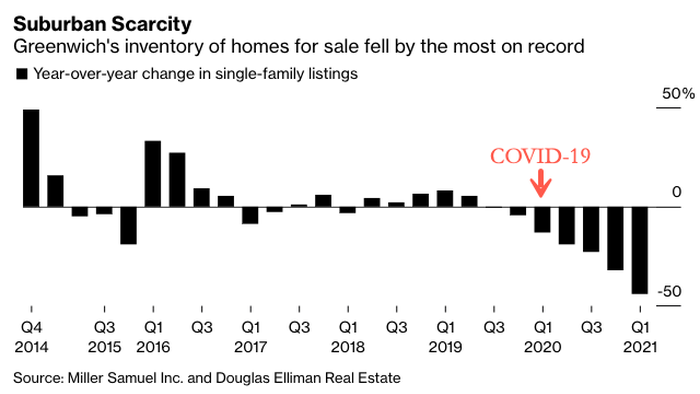 
New York City millionaires quickly realize their hometown has transformed into a socio-economic disaster that could rival the 1970s in terms of crime, unemployment, and taxes. Many have made a beeline for neighboring Greenwich.

After years of stagnant demand growth for its multi-million dollar mansions due to the secular decline of “active” asset management, the hedge fund capital of the world is having a real estate renaissance in the town located in southwestern Fairfield County, Connecticut. And it only took a virus pandemic.

According to Bloomberg, citing a new report from Miller Samuel and brokerage Douglas Elliman, Greenwich single-family listings are slim pickings these days. First-quarter listings plunged to all-time-lows with data going back to 2014.

In a note titled “Shortage Of Greenwich Homes Triggers Bidding War As New Yorkers Flock To Suburbs,” we first outlined how a shortage of Greenwich homes was developing in January. Then in March, we continued to detail the buying frenzy for Greenwich mansions.

“Everything that’s not tied down seems to be selling,” said Jonathan Miller, president of the appraisal firm. Single-family home sales in the posh Connecticut town soared 94%, with 200 properties changing hands in the first quarter. The median price of those sales was $2.24 million, a 31% increase.

One reason for soaring prices is the plunge in supply. Tight inventory of single-family houses in Greenwich has forced buyers to move fast and often pay above list price.

This is just another sign of millionaires in The Big Apple are tired of being confined to tight living quarters during the pandemic and want backyards and spacious homes in nearby suburbs or rural communities. They’re also exhausted from the city’s descent into socialist paradise started by mayor Bill de Blasio is only just beginning.