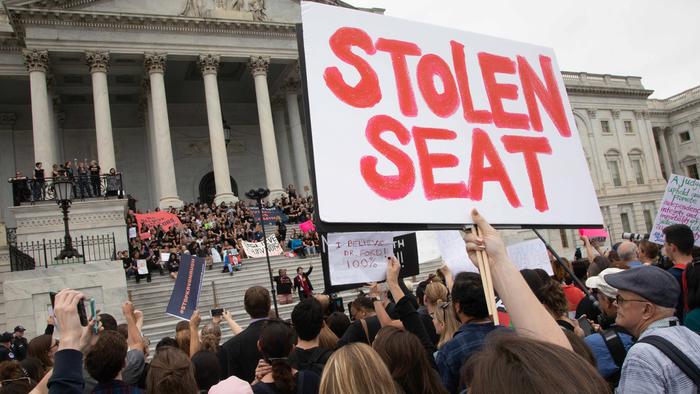 
Having refused to answer the question of whether a Biden administration would expand the Supreme Court (so-called ‘court-packing’) in mid-October, “we, the people” are perhaps closer to knowing the answer as to what happens next to the nation.

As a reminder, when presidential candidate Joe Biden was asked by a reporter “will you stack the courts?” – he replied that voters “don’t deserve” to know his stance until after the election…

Asked if voters deserve to know if he would pack the Supreme Court, Biden says “No, they don’t deserve” to. pic.twitter.com/uig5d14tsH

But now, as The New York Times reports, The White House is taking action after progressives pushed to add seats to the court to balance the conservative stamp put on it by President Trump.

“There’s growing recognition that the Supreme Court poses a danger to the health and well-being of the nation and even to democracy itself,” said Aaron Belkin, director of the group Take Back the Court.

“A White House judicial reform commission has a historic opportunity to explain the gravity of the threat and to help contain it by urging Congress to add seats, which is the only way to restore balance to the court.”

President Biden on Friday will order a 180-day study of adding seats to the Supreme Court, making good on a campaign-year promise to establish a bipartisan commission to examine the potentially explosive subjects of expanding the court or setting term limits for justices, White House officials said.

In his executive order on Friday, the president will create a 36-member commission charged with examining the history of the court, past changes to the process of nominating justices, and the potential consequences to altering the size of the nation’s highest court.

The panel will be led by Bob Bauer, who served as White House counsel for former President Barack Obama, and Cristina Rodriguez, a Yale Law School professor who served as deputy assistant attorney general in the Office of Legal Counsel under Mr. Obama.

The issue of whether to alter the size of the court, which has been set at nine members since just after the Civil War, is highly charged, particularly at a moment when Congress is almost evenly divided between the two parties. An attempt by Mr. Biden to increase the number of justices would require approval of Congress and would be met by fierce opposition.

The New York Times admits that activists who say a larger court would give Mr. Biden the chance to appoint a number of liberal justices may be disappointed by his commission. Additionally, Justice Breyer, 82, is the oldest member of the court and the senior member of its three-justice liberal wing, warned this week that efforts to expand the court for political reasons could undermine the trust that the public has in the court and the decisions that it makes on important issues.

“I hope and expect that the court will retain its authority,” Justice Breyer said.

“But that authority, like the rule of law, depends on trust, a trust that the court is guided by legal principle, not politics. Structural alteration motivated by the perception of political influence can only feed that perception, further eroding that trust.”

As a reminder, this comes after President Biden said yesterday that “no amendment to the Constitution is absolute” when discussing his plans for gun control.

“No amendment to the Constitution is absolute. You can’t yell ‘fire’ in a crowded movie theater and call it freedom of speech. From the beginning, you couldn’t own any weapon you wanted to own.” pic.twitter.com/shOkaXmLqH

But, in theory, we already know Joe’s “opinion” on packing the courts – he thinks it’s a “bonehead idea.”

You cannot make this up! Have we reached peak-gaslighting yet?