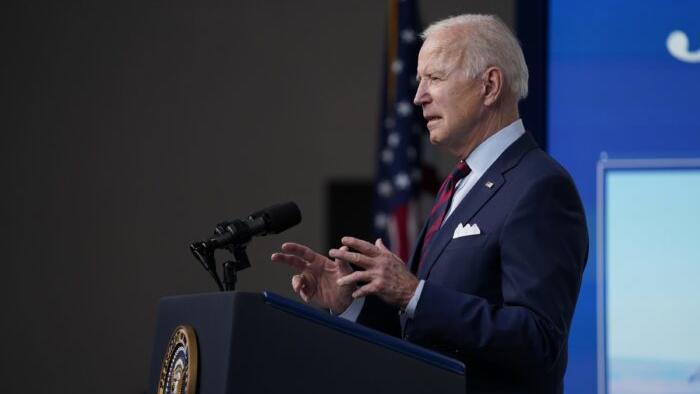 He also claimed that the orders he’ll sign won’t impact Americans’ rights to own guns under the Second Amendment.

Pres. Biden: “Whether Congress acts or not, I’m going to use all the resources at my disposal as president to keep the American people safe from gun violence.” pic.twitter.com/82PafLsLvm

Biden is directing the Department of Justice to, within 30 days, issue a proposed rule aimed at curbing the spread of so-called ghost guns, or guns that are made from build-it-yourself kits.

The department will also in the next two months issue a proposed rule declaring a stabilizing brace that turns a pistol into a short-barreled rifle and publish model “red flag” legislation for states.

Red flag laws let family members or law enforcement ask a court to bar people from owning guns if the people allegedly present a danger to themselves or others.

Three other actions announced by the administration are:

The new announcements mark the first wave of executive action on guns that the White House had vowed to take following recent mass shootings in Boulder, Colorado, and Atlanta, Georgia.

Biden is still urging Congress to pass legislation to reduce gun violence, the administration said, but he and other officials “will not wait for Congress to act to take its own steps—fully within the Administration’s authority and the Second Amendment—to save lives.”

Biden told a press conference after the Boulder shooting last month that Congress should ban so-called assault weapons and high-capacity magazines, referring to a bill he helped pass as a senator in 1994 that did just that for 10 years.

A Department of Justice-funded study found the results of that ban, which expired in 2004, “mixed.” A RAND Corporation review of gun restriction policies said there is “inconclusive evidence for the effect of assault weapon bans on mass shootings.”

A makeshift fence stands around the parking lot outside a King Soopers grocery store where a mass shooting took place a day earlier in Boulder, Colo., on March 23, 2021. (David Zalubowski/AP Photo)

Democrats quickly praised the Biden administration’s actions on guns, including the planned nomination of Chipman.

“This is the most significant executive action on gun violence in a generation. These actions set a model of courage & strength that Congress must now match,” Sen. Richard Blumenthal (D-Conn.) said in a tweet.

“The action on ghost guns will protect against untraceable, homemade weapons that no law abiding gun owner would want,” he added.

“Each of these executive actions will start to address the epidemic of gun violence that has raged throughout the pandemic, and begin to make good on President Biden’s promise to be the strongest gun safety president in history,” Everytown President John Feinblatt said in a statement.

Lateif Dickerson handles some of his rifles at his gun instruction headquarters in Jersey City, N.J., on March 25, 2021. (Spencer Platt/Getty Images)

Biden has struggled to find traction for gun restriction proposals in Congress, especially in the 50–50 Senate, where Democrats maintain a slim majority only by virtue of Vice President Kamala Harris’s tiebreaking vote.

Police gather at the scene of an afternoon shooting along Ludlow Street in the lower Manhattan neighborhood of New York City, amid a continued rise in shootings in the city, on March 30, 2021. (Spencer Platt/Getty Images)

During the pandemic, gun sales have soared to record-highs as Americans sought to protect themselves against rising crime and dramatically altered conditions.

Christopher Herrmann, an assistant professor at the City University of New York’s John Jay College of Criminal Justice, told The Epoch Times last month that some new laws or regulations, such as red flag laws, could help decrease the number of shootings and murders in the future.

But Lisa Dadio, director of The Center for Advanced Policing at the University of New Haven, said those would not help because most people committing the crimes are not getting their guns legally.

Joe Biden is either lying, never bought a gun at a gun show, or both https://t.co/snfzL4irc8

Republicans and groups who say they fight to protect Second Amendment rights said they opposed what the Biden administration is doing.

“Joe Biden knows he cannot beat gun owners in Congress. Instead, he’s circumventing the legislative process to impose his own tyrannical vision by executive fiat,” he added.

The federal government will face trouble enforcing rules deemed inconsistent with laws in Arizona. Gov. Doug Ducey, a Republican, this week signed a bill that prohibits law enforcement from enforcing any laws or rules from the U.S. government “that is inconsistent with any Arizona law regarding the regulation of firearms.”