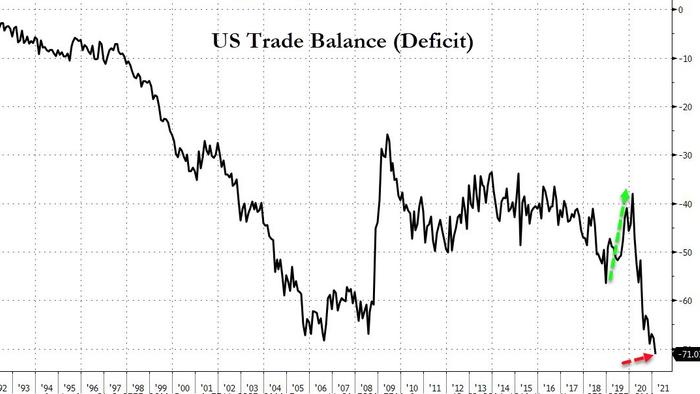 
After the 2018-2019 rebound in the US Trade Balance to a three year low (as Trump ‘adjusted’ US-China’s relationship), the trade deficit has surged from the start of the pandemic to the latest data in February, at $71.1 billion – the largest trade deficit in US history (from a revised $67.8 billion a month earlier). This was slightly worse than the expected $70.5 billion deficit.

A decline in exports exceeded a drop in the value of imports during the month as severe winter weather disrupted two-way trade.

The deficit with China increased $3.1 billion to $30.3 billion in February.

The deficit with Canada increased $2.2 billion to $4.0 billion in February.

The deficit with Mexico decreased $5.1 billion to $6.8 billion in February.

Merchandise imports have been pouring into the nation’s ports, leading to shipping container shortages that have driven up freight rates and left domestic producers scrambling at a time when inventories are lean.