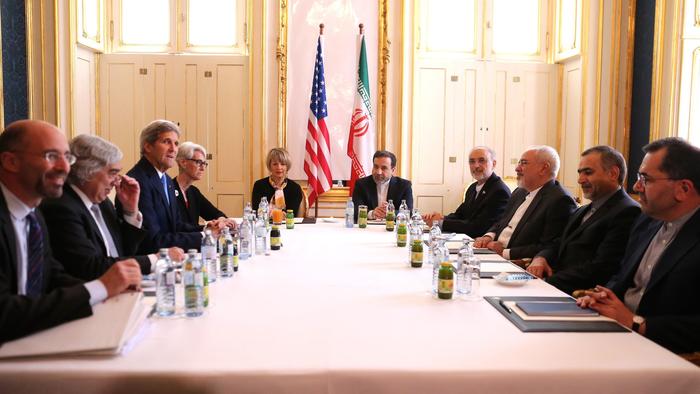 
Just a day ahead of Tuesday’s much anticipated meeting among signatories to the 2015 JCPOA nuclear deal in Vienna, Iran is attempting to put some distance between itself and earlier widespread reporting that it will hold talks with the United States.

Deputy Foreign Minister for Political Affairs Abbas Araghchi told a state media outlet Sunday “We will not have any direct or indirect talks with the United States in Vienna.”

Essentially this is the Iranian side emphasizing that US negotiators won’t be allowed in the same room and the talks among the UK, France, Germany, Iran, Russia and China proceed. The American delegation will – perhaps somewhat humiliatingly in terms of the optics – be confined to the kids table, apparently.

As some officials are describing, it will be “some town but not same room”:

The European parties to the accord said they would have “separate” contacts in Vienna with the United States and Iran, which has already rejected a direct meeting with the US, with a European diplomat telling Reuters news agency that, “Iran and the US will be in the same town, but not the same room.”

Particularly the European JCPOA signatories present are expected to act as intermediaries communicating messages to the US team.

The Iranian official, however, did offer a scenario in which there could be more direct dealings:

“In our opinion, there is only one step. All of the US sanctions which were reimposed after [President Donald] Trump’s withdrawal from the JCPOA, or which have been imposed recently, or have been relabelled, must be defined and the United States must remove them, then we will verify and return to our commitments,” Araghchi said.

Immediate sanctions relief has long been the chief Iranian demand, something which so far the Biden administration has not budged on, despite multiple promises on the campaign trail of a speedy return to the nuclear deal brokered by Obama and later in 2018 broken by Trump.

“These remain early days, and we don’t anticipate an immediate breakthrough as there will be difficult discussions ahead. But we believe this is a healthy step forward,” Price began.

What is everyone talking about in the E&S market?

The US Dollar Gripped the Ascendency as Risks of Recession Swirl. Will USD go Higher?