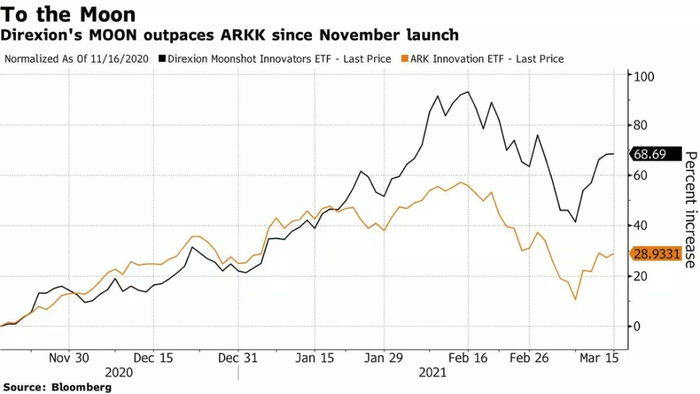 
While much of the NASDAQ-based success and praise of late has been focused around Cathie Wood’s ARK Invest, there has actually been one fund that has outpaced and outperformed ARK’s flagship Innovation Fund (ARKK) over the same course of time.

The Direxion Moonshot Innovators ETF (MOON) has risen 39% this year, according to Bloomberg. This smashes ARKK’s performance for 2021, which is only up 3.5% over the same period of time.

Interestingly, MOON was spawned alongside of another new “innovation” ETFs after the wild success of Wood’s ARKK.

This year, Wood’s funds have experienced significant volatility, which we have been documenting at length here on Zero Hedge. Most of ARK’s funds wind up moving with the NASDAQ, which has had a turbulent start to the year, despite remaining new all time highs.

Many of the ARKK copycats, like MOON, have avoided the turmoil in the NASDAQ by owning significant amounts of biotechnology stocks. MOON, for example, owns ImmunityBio, Inc., which is up 131% this year.

Mohit Bajaj, director of ETFs for WallachBeth Capital, said MOON “has a heavier weight to biotech companies and less on straight technology and internet companies, which are the reason why ARKK has underperformed.”

MOON is up about 70% since its launch in November, but has only brought in about $220 million in assets. This compares to the $7 billion ARKK has brought in over the same time. ARKK’s underperformance to MOON has been a result of its heavy stakes in names like Tesla, Square and Roku, the report notes. Meanwhile, MOON is spread out slightly more and is “focusing on multiple themes, as opposed to a narrow theme like cloud computing or genomics or video games,” according to Todd Rosenbluth, director of ETF research for CFRA Research.

MOON’s largest sector allocation is biotech, which makes up 17% of the fund. ARKK’s is a 22% allocation to internet companies.

Sal Bruno, chief investment officer at IndexIQ, said: “There’s definitely a first-mover advantage to ETFs. People get into them and they tend to stay in them as long as they are doing well.”