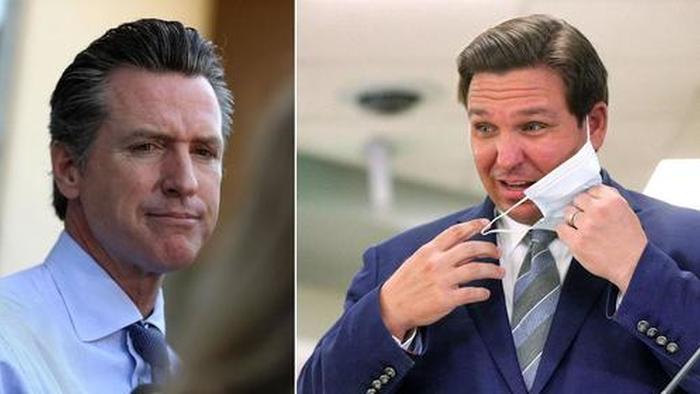 
As Democrat lockdown governors Gavin Newsom and Andrew Cuomo struggle like drowning mice to lead their states out of ‘science’-based pandemic restrictions while embroiled in political scandals, Florida Governor Ron DeSantis (R) – who notably did not lock down his state – is looking so good that even CNN hit pieces can’t help but give him credit for a booming economy and low COVID numbers – even if they only go so far as to call it a happy accident.

In a Wednesday article titled “A year into the pandemic, Florida is booming and Republican Gov. DeSantis is taking credit,” CNN‘s Jeff Zeleny writes:

As many parts of the country embark on an uneasy march toward normalcy, Florida is not only back in business — it’s been in business for the better part of the past year. DeSantis’ gamble to take a laissez faire approach appears to be paying off — at least politically, at least for now, as other governors capturing attention in the opening phase of the pandemic now face steeper challenges.

Despite far fewer rules and restrictions, Florida lands nearly in the middle of all states on a variety of coronavirus metrics. The state has had about 3% more Covid-19 cases per capita than the US overall, but about 8% fewer deaths per capita.

“If you look at what’s happening in South Florida right now, I mean this place is booming. It would not be booming if it was shut down,” DeSantis said last month as tourist season began to heat up. “Los Angeles isn’t booming. New York City’s not booming. It’s booming here because you can live like a human being.”

California, meanwhile, refuses to disclose the COVID-19 data they used to determine when lockdown orders are implemented or rescinded, while at least two judges and the Supreme Court have invalidated lockdown orders due to a lack of science, or challenged pro-lockdown rulings by lower courts, and several sheriffs of large counties have openly rebelled against Newsom’s edicts.

Newsom even issued a racial “equity requirement” that must be met before counties can move down a tier in lockdown restrictions.

“Those lockdowns have not worked. They’ve done great damage to our country,” he said at a Tallahassee press conference. “We can never let something like this happen again. Florida took a different path. We’ve had more success as a result.”

CNN even took notice of the youngest governor in the nation’s political windfall.

With spring on the horizon, DeSantis suddenly appears to be in a position of strength compared to some of his fellow governors, including many of whom took far more restrictive approaches to the fight against coronavirus that caused a trickle-down effect on the economy.

He is not facing a potential recall like California Gov. Gavin Newsom, under investigation like New York Gov. Andrew Cuomo or being second-guessed for lifting a statewide mask mandate like Texas Gov. Greg Abbott.

DeSantis continues to rack up points with Florida Republicans, announcing on Wednesday that Florida will “expressly exclude…Critical Race Theory.”

Newsom, meanwhile, is going on “The View” and making misleading statements about COVID-19 stats while trying to frame recall signatories as white supremacists and QAnon followers.

With the left unable to poke holes in the actual data, some are now saying it’s a waste of time to compare Florida with other states.

“What I’d love to ask about Florida is, if we had done things differently in Florida, what would it have looked like?” asks Jason Salemi, an associate professor of epidemiology at the University of South Florida College of Public Health, who says that comparing states “complicated and often counterproductive.”

“If you use those metrics of where Florida is relative to a lot of other states, we’re looking middle of the pack. So no, it hasn’t been a disaster in that we’re leading in mortality per capita in cases per capita,” he continued, adding “It’s not always about doing well relative to your peers. It’s how can we prevent as much morbidity and mortality from the virus while keeping an eye on what’s happening with our economy.”

And what would they be saying if Florida was doing worse than California and New York?