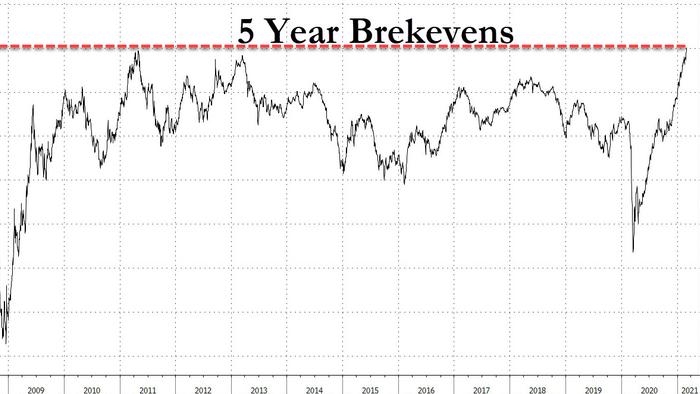 
The market is officially freaking out about inflation.

While 10Y breakevens have been relatively rangebound in recent days and printed at 2.23% earlier, the action now appears to be focusing on the belly where moments ago 5Y breakevens surged above 2.50%, rising to the highest since 2008.

While there is no one catalyst, the market appears to be transfixed by every reflation print and following the earlier record print in the Markit Service PMI prices print, which as Markit noted “cost pressures remained elevated, with the rate of input cost inflation accelerating to the fastest on record (since October 2009)” and “in response, firms raised their selling prices at the second-quickest rate since data collection began over 11 years ago”, a subsequent ominous print came from the Service ISM which while missing overall due toi a big drop in New Orders, also saw prices surge 7.6 to 71.8.

Bottom line: traders have become extremely jittery when it comes to rising prices and any incremental print that suggests reflation is here to stay will push yields ever higher until the Fed does something, with the most likely outcome some sort of Yield Curve Control needing to be launched.