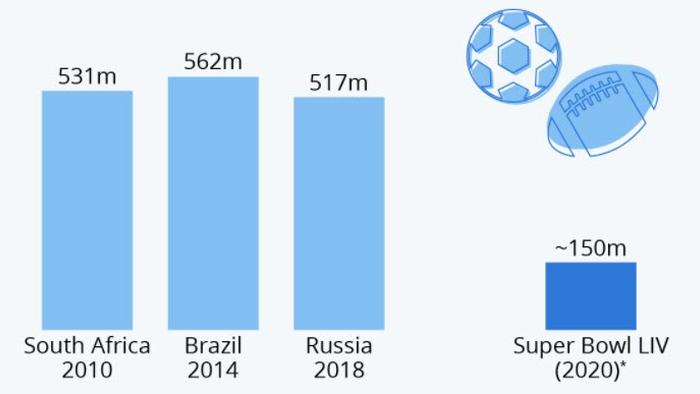 
While Americans are getting ready for what they consider the biggest sporting event of the year, the 55th Super Bowl, Statista’s Felix Richter writes that the rest of the world couldn’t care less.

Well that may be a bit harsh, but from an American perspective it’s easy to overestimate the global appeal of the biggest game in (American) football.

Speaking of football, soccer, i.e. the proper kind of football from a European perspective, far exceeds the Super Bowl in terms of global interest. The FIFA World Cup Final, played every four years to culminate a month-long tournament of 32 nations, really is the biggest game in the world, regularly reaching more than a billion people across the globe.

According to FIFA, the 2018 World Cup final between France and Croatia reached an average live audience of 517 million viewers, with more than than 1.1 billion people tuning in over its 90 minutes.

The 2020 Super Bowl pales in comparison, having had an average viewership of 99.9 million in the U.S. plus an estimated 30 to 50 million viewers around the world.