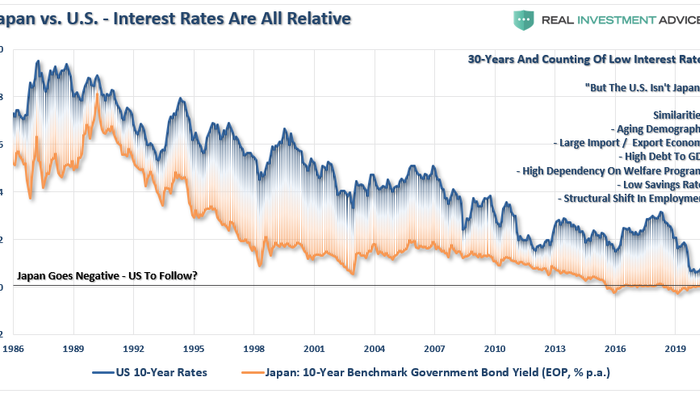 We recently penned an article discussing the “moral hazard” fostered by the Fed’s ongoing monetary interventions. However, this story is fraught with zombies and the path to “Japanification.”

The Fed recognizes their ongoing monetary interventions have created financial risks in terms of asset bubbles. They are also aware that most policy tools are likely ineffective at mitigating financial risks in the future. Such leaves them being dependent on expanding their balance sheet as their primary weapon.

Such was a point they made last year, which bypassed overly bullish investors.

“… several participants observed that equity, corporate debt, and CRE valuations were elevated and drew attention to  high levels of corporate indebtedness and weak underwriting standards in leveraged loan markets. Some participants expressed the concern that financial imbalances-including overvaluation and excessive indebtedness-could amplify an adverse shock to the economy …”

“… many participants remarked that the Committee should not rule out the possibility of adjusting the stance of monetary policy to mitigate financial stability risks, particularly when those risks have important implications for the economic outlook and when macroprudential tools had been or were likely to be ineffective at mitigating those risks…”

That was in January 2020. Just a couple of short months later, markets were in the worst drawdown since the “Great Depression.”

With Central Bank interventions, it is not what is “seen” that is important, but what isn’t.

We “see” the trillions of dollars of liquidity having positive effects on asset markets.

However, what most overlook is what is happening elsewhere in the economy.

We previously discussed how the Fed’s interventions made the top 10% wealthier while bypassing the bottom 90% of income earners.

But the more insidious effect has been the rise of “zombie” companies. These companies survive only due to the Fed’s suppression of interest rates and creating a speculative investment climate for bond issuance. As discussed in “Recessions Are A Good Thing:”

“‘Zombies’ are firms whose debt servicing costs are higher than their profits but are kept alive by relentless borrowing.

Such is a macroeconomic problem. Zombie firms are less productive, and their existence lowers investment in, and employment at, more productive firms. In short, a side effect of central banks keeping rates low for a long time is it keeps unproductive firms alive. Ultimately, that lowers the long-run growth rate of the economy.” – Axios

Such also explains why there are currently record levels of “junk bond” issuance in the market.

The opportunistic high-yield sector did not go calmly into year-end, as raucous December issuance ($29.5 billion) shattered yet another long-standing record for the month ($27.6 billion, in December 2012), and propelled issuance for the last three months to the highest total ever for a fourth-quarter period. And this was no swan song for the primary market, as participants see the strong finish to 2020 as a lead-in to another hectic year ahead, as festering economic uncertainty and low borrowing costs stoke incentives to deepen liquidity and push out debt-maturity profiles.” – S&P

While “zombies” roam the earth in record numbers, the unseen cost to the economy goes unnoticed.

The New York Fed recently had a study on how “zombie credit” has affected inflation, a byproduct of economic growth, in Europe.

“Europe’s economic growth and inflation have remained depressed, consistently undershooting projections. In a striking resemblance to Japan’s “lost decades,” the European economy has been recently characterized by persistently low-interest rates and the provision of cheap bank credit to impaired firms, or “zombie credit.”

While this study applies to Europe, we see the same effect in the U.S. Over the last decade, as zombie companies have risen to a record level in the U.S., inflation remains suppressed and well below targeted levels.

While economists continue to maintain perennial hopes of strong economic growth and inflation, such continues to remain elusive and a function of displaced capital. To this point, Daniel LaCalle noted, the displacement of capital specifically as a cause of disappointing economic growth in 2021.

For the last 40 years, each Administration and the Federal Reserve have continued to operate under Keynesian monetary and fiscal policies believing the model worked. However, most of the aggregate economic growth gets financed by deficit spending, credit expansion, and a reduction in savings. In turn, the reduction of productive investment into the economy has led to slowing output. As the economy slowed and wages fell, it forced the consumer to take on more leverage, which also decreased savings. As a result of the increased leverage, it diverted more of their income into servicing the debt.

Notably, most government spending programs redistribute income from workers to the unemployed. Such increases the welfare of the many hurt by the recession. However, what models ignore is the reduced productivity that follows a shift of resources toward redistribution and away from productive investment.

Most telling is the current economists’ inability to realize the problem of trying to “cure a debt problem with more debt.”

The Keynesian view that “more money in people’s pockets” will drive up consumer spending and economic growth has been wrong. It hasn’t happened in 40-years.

Such was a lesson learned by Japan.

The Path To “Japanification”

From 1980 to the present, the Japanese economy has maintained an average growth rate of just 0.43%. For those who live within the economy, such a rate of growth is barely distinguishable from a recession from the young to old. Of course, when Japan regularly slips into recession every few years, such is not surprising.

Since the financial crisis, Japan has been running a massive “quantitative easing” program which, on a relative basis, is more than 3-times the size of that in the U.S. However, while stock markets have performed well with Central Bank interventions, economic prosperity is roughly equal to this century’s beginning.

Furthermore, despite the BOJ’s balance sheet consuming 80% of the ETF markets, not to mention a sizable chunk of the corporate and government debt market, Japan remains plagued by rolling recessions and low inflation, and low-interest rates. (Japan’s 10-year Treasury rate fell into negative territory for the second time in recent years.)

Why is this important? Because Japan is a microcosm of what is happening in the U.S. As I noted previously:

“The U.S., like Japan, is caught in an ongoing ‘liquidity trap’ where maintaining ultra-low interest rates are the key to sustaining an economic pulse. The unintended consequence of such actions, as we are witnessing in the U.S. currently, is the battle with deflationary pressures. The lower interest rates go – the less economic return that can be generated. An ultra-low interest rate environment, contrary to mainstream thought, has a negative impact on making productive investments, and risk begins to outweigh the potential return.”

As my colleague Doug Kass noted, Japan is a template of the fragility of global economic growth.

“The bigger picture takeaway the fact that financial engineering does not help an economy, it probably hurts it. If it helped, after mega-doses of the stuff in every imaginable form, the Japanese economy would be humming. But the Japanese economy is doing the opposite. Japan tried to substitute monetary policy for sound fiscal and economic policy. And the result is terrible.”

I agree with Doug, as does the data, that while financial engineering props up asset prices, it does nothing for an economy over the medium to longer-term. It actually has negative consequences.

It has taken a massive amount of interventions by Central Banks to keep economies afloat globally over the last decade, and there is rising evidence that growth continues to decelerate.

Furthermore, we have much more akin to Japan than many would like to believe.

The lynchpin to Japan, and the U.S., remains demographics and interest rates. As the aging population grows, becoming a net drag on “savings,” the dependency on the “social welfare net” will continue to expand. The “pension problem” is only the tip of the iceberg.

While another $2-4 Trillion in QE might indeed be successful in keeping the bubble inflated for a while longer, there is a limit to the ability to continue pulling forward future consumption to stimulate economic activity. However, such continues to leave an ever-growing void to fill in the future. Eventually, the void becomes too great to fill.

The Central Banks continue to repeat the same policies while hoping for a different result.

What’s the worst that could happen?