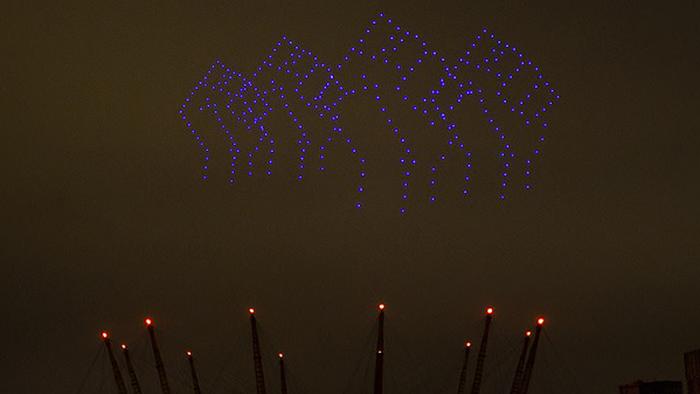 In a display that will turn off the vast majority of the country, a light show involving 300 drones was recorded last night in London featuring a celebration of the openly Marxist Black Lives Matter group, among other cringe inducing messages including a reference to online Zoom meetings.

The drone light show will air on New Year’s Eve as a replacement for the annual Thames firework show usually attended by thousands.

Yet the majority of taxpayers are sure to question why, especially in a year when the economy has been destroyed by largely ineffectual lockdowns, their money is being spent on an expensive light show celebrating the Black Lives Matter organisation.

Last month, a survey found that a majority of 55% of British people believe that the Black Lives Matter movement has enflamed racial tensions rather than improving the situation in the country.

The British government has been out of step with the public on this issue all year, given that at the height of a national lockdown it allowed BLM protests to go ahead unimpeded, and even consented to statues of historical figures, including Winston Churchill, as well as war memorials being covered by boxes at the behest of the BLM mob, who were previously seen desecrating them.

The overriding public opinion of the group can be gauged at sports stadiums, where since fans have been let back in in smaller numbers, the football players ‘taking the knee’ have been roundly booed.

Among other weird and indecipherable symbols seen during the pre-recorded NYE light show, cringe messages such as ‘Together’ and ‘NHS’ inside a heart were created with the drones.

Who is ‘Together?’ – Everyone has been kept apart by draconian lockdowns.

A reference to a Zoom call was created with the words ‘You’re on mute’, as if people being forced to communicate only through computers is something to celebrate about 2020:

Not surprisingly, London mayor Sadiq Khan had a hand in the light show, describing it as a “special broadcast to reflect on the defining moments of 2020 and a message of hope for the New Year”.

Answers on a postcard as to what the f*ck this is.

How many millions did taxpayers pay for this shit image of an old guy?

Khan added ‘The Covid-19 pandemic has meant we are not able to put on our world-famous public event on the banks of the Thames this year, but it’s important we reflect on and pay tribute to the defining moments of the year and look to 2021 with hope, and that’s why we are replacing it with a unique broadcast on BBC One.”

Globalist Phoenix from the flames? Or just a shit bird with no head. You decide. Either way it’s a colossal waste of money.