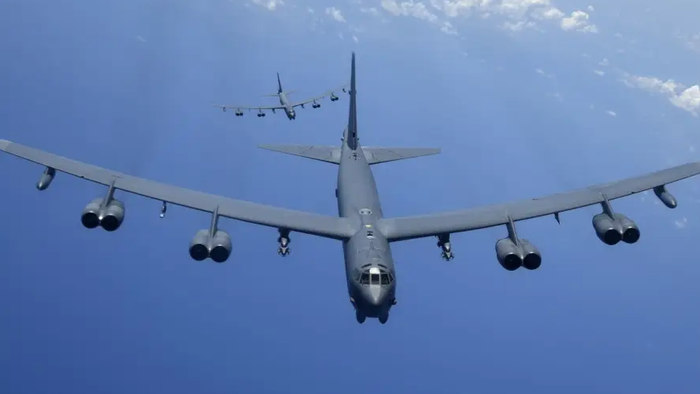 
US Central Command (CENTCOM) has confirmed on Wednesday that it flew B-52 “Stratofortress” bombers from Minot Air Force Base in North Dakota non-stop to the Persian Gulf in order to send a warning message to Iran.

A pair of the massive bombers flew roundtrip in what Fox News described as a 30-plus-hour mission in order to “send a fresh warning to Iran” as a senior military official has warned of possible “complex attacks” against American interests in the region.

“The two-ship deployment also delivers a clear deterrent message to anyone who intends to do harm to Americans or American interests,” CENTCOM said in an official statement.

The “deterrence” operation is part of a broader build-up of US forces in the Persian Gulf area, which lately included sailing the USS Georgia nuclear submarine last week through the Strait of Hormuz. Israel is also believed to have a sub operating in the region.

“The United States continues to deploy combat-ready capabilities into the U.S. Central Command area of responsibility to deter any potential adversary, and make clear that we are ready and able to respond to any aggression directed at Americans or our interests,” CENTCOM commander Gen. Frank McKenzie said of the bomber flyover. “We do not seek conflict, but no one should underestimate our ability to defend our forces or to act decisively in response to any attack.”

Two American B-52 bombers flew another nonstop mission from the U.S. to the Middle East to send a fresh warning to #Iran as a senior military official said new warnings had been detected that “complex attacks” against U.S. are brewing.https://t.co/vKqHLkHxzY

A US military and intelligence official told Fox:

“We’re seeing planning for, particularly in Iraq for complex attacks that require Iranian assistance in order to be pulled off.”

We are now just days away from the one-year anniversary of the assassination of IRGC Quds Force Gen. Qassem Soleimani. The popular and powerful Iranian general was killed via US drone strike on Jan. 3, 2020 as his convoy exited Baghdad International Airport.

Leaders in Tehran have vowed revenge, but many analysts believe they’ll continue to be patient and conservative in their calculations in terms of the risk they’re willing to take, given Joe Biden is about to enter the White House, and it’s widely believed that with Trump still in office a major US or Israeli strike could still be greenlighted.

The US Embassy in Baghdad is also greatly beefing up security after earlier this month coming under major missile attack. US personnel in Iraq are said to be bracing for going into January.