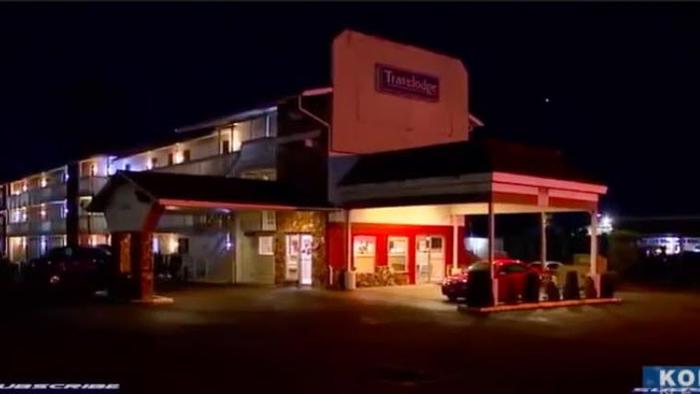 Homeless Antifa activists booked 16 hotel rooms at a Travelodge in Tacoma, Washington on Christmas Eve and are refusing to pay, demanding the local government pay for their accommodations and turn the motel into a shelter.

Autonomous zone: A far-left group booked 16 rooms for one night in a struggling motel near Seattle. But it was a scam. The dozens of activists are refusing to leave & won’t pay. And police won’t remove the trespassers. https://t.co/aBX4xMrmhh

KOMO News has reported that over 40 homeless people have moved into the hotel, with no plans on paying.

Shawn Randhawa, the motel operator, told KOMO News that if the occupants continue to stay, he will be forced to shut down and lay off his employees. Protests in the parking lot have driven away most of the other paying customers, Randhawa said.

“I’ll have to lock the doors. and if the city won’t kick them out, they can have it,” he said.

“I’ll shut off the water and I’m not fighting with these people. I believe there should be a law.”

A spokesperson for the Antifa group Tacoma Housing argued that they are bringing business to the hotel.

The Travelodge was almost entirely empty when we moved in, like all hotels during the pandemic. We’re not costing the owner business; we’re bringing him business by insisting the City and County pay him with CARES money.

“Like most – or all – hotel owners, he’s struggling right now because of the pandemic, in fact we are bringing business to the hotel. We paid for the first night and now we’re demanding that the city and county pay for the other nights we’ve been here,” the spokesperson said in an interview with Andy Ngo.

“We paid for the first night and now we’re demanding that the city and county pay for the other nights we’ve been here.”

Spokesperson for antifa group Tacoma Housing Now explains the plan behind the occupation of 16 rooms at a motel near Seattle. pic.twitter.com/SlwLNH2e7a

“Because of the protest, I have nothing else. I was barely getting through this pandemic, and now this. This Christmas, the Grinch came.”

The city’s police department has said they would like to work with the Tacoma Housing organization, rather than remove the occupants by force.

“We’re trying to see if we can work out a resolution without having to take law enforcement action,” Police Chief Pete Fisher told The News Tribune.

“We’re talking about people with medical issues, cold weather that are homeless. So we are trying to work with our neighboring agencies to see what we can do in the form of relief, relief or temporary shelter.”

Randhawa said he does not feel supported by the police or the city.

“They are keeping me hostage. No one is out to help me,” he said. “It’s complete lawlessness in the city of Fife.”

Settling in for Night 6 warm, dry, and safe — and not at risk of freezing to death. Victory ✊