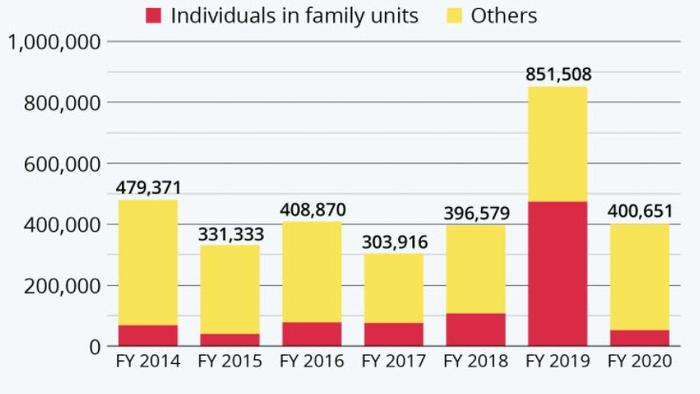 While in the previous year, the number of border apprehensions skyrocketed and record numbers of families arrived mainly from Central America, Statista’s Katharina Buchholz points out that the COVID-19 pandemic cut border crossings back down to 2018 levels with the number of families reaching a low.

While in 2019, Non-Mexicans outnumbered Mexicans 4:1 at the Southern border, this trend was reversed in 2020 with more Mexicans apprehended once again, as records from Customs and Border Protection show.

Because many of the new arrivals from Central America had been applying for asylum, the Trump administration in 2019 overhauled its application process, making many asylum seekers wait in camps on the Mexican side without assistance. These changes were implemented after another system overhaul – the separation of families in U.S. custody and the tendency to release fewer immigration detainees on bail – had caused chaotic scenes at detention centers and an international outcry.

Historically, Mexicans made up the largest share of undocumented immigrants to the U.S. but have been more successful at finding work in Mexico, where the economy is improving and workers are more sought after while the country’s population ages. As more asylum seekers and less work migrants arrived, the U.S. also slashed the number of refugees it accepts annually to the historic low of 18,000 and in the COVID year of 2020 admitted a record-low number of just around 3,000 asylum seekers.