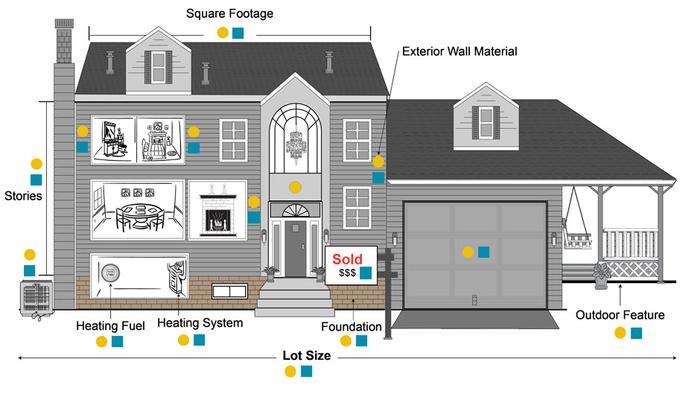 
The average square footage of new homes sold in the United States increased from 2,457 in 2010 to 2,724 in 2015 but then dropped again in 2019 to 2,518, according to the U.S. Census Bureau’s Characteristics of New Housing. The report is based on data collected in the Survey of Construction (SOC) and provides national and regional details on new privately owned single-family and multifamily residential structures. Characteristics include square footage, number of bedrooms and bathrooms, types of wall material, parking, sales prices and more.

Despite the decline in average square footage, the share of homes with four bedrooms or more that were sold increased from 41% in 2010 to 49% in 2019.

In 2019, 69% of new single-family houses sold were purchased using conventional financing (and other types of financing excluding Federal Housing Administration (FHA), Veteran’s Administration (VA) or cash purchases), up from 58% in 2010.

Conventional financing, the primary way new home buyers paid for their purchases, is a mortgage loan not guaranteed by any government agency, such as the VA or FHA.

One way to get more details on new single-family homes is through this infographic. Simply hover for a quick fact on completed or sold homes and click on the legend to go to the tables with the information.

Multifamily housing is defined as residential buildings containing units built one on top of another and those built side-by-side without a ground-to-roof wall and/or common facilities, such as attic, basement, heating system and plumbing. There were 352,000 new multifamily units completed in the United States in 2019, compared to 155,000 in 2010. The numbers include units for sale as condominiums or cooperatives.