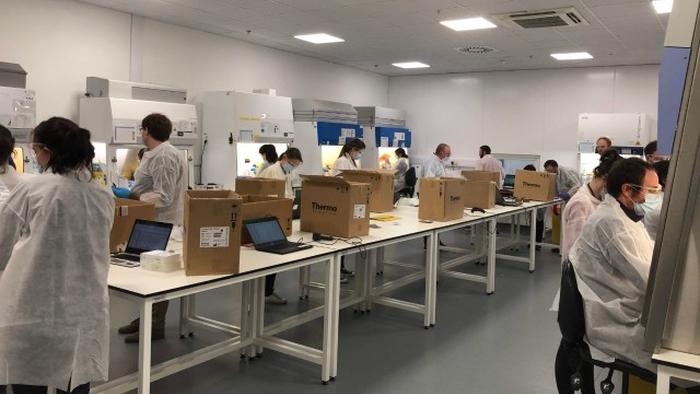 
The UK’s largest COVID-19 testing lab has suffered outbreaks in three out of its four scientific testing teams, after what one worker claims were repeated breaches of safety protocols.

While the total number of infected are unknown, approximately 20 out of 70 people in one of the teams at the Milton Keynes Lighthouse Laboratory are currently isolating according to the whistleblower.

Sky News reports that the outbreak has put considerable strain on the lab, which has been tasked with processing 70,000 tests per day from across the country – yet hasn’t been able to achieve that number despite 12-hour shifts and “cramped working conditions.“

“The whole thing’s a joke,” said the worker.

The lab worker also raised concerns about the safety of the lab, saying that rules put in place to keep staff safe were being broken in order to meet targets – a claim the Department of Health and Social Care denied.

The lab worker said that new recruits had been sitting in the canteen while they waited for their test results.

According to the lab worker, one new warehouse staff member received a positive test result after they had sat in the canteen during a period when a whole lab team had been in there for a break. –Sky News

According to the whistleblower, a ‘bubble system’ was implemented to keep staff separate, following a recommendation from the Health and Safety Executive – yet, it’s not being respected as workers move between groups and risk further cross-contamination. There has also been mixing in the building’s lobbies and at the canteen.

This may be the inevitable outcome when an unprecedented effort to process thousands of tests per day collides with reality. We wonder if testing accuracy has also suffered?