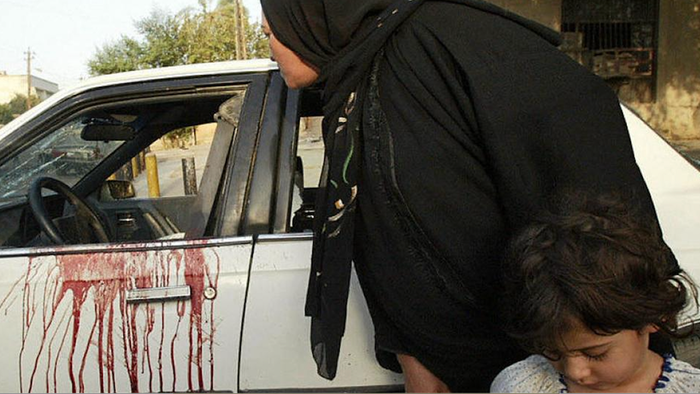 
Authored by Brett Wilkins via via CommonDreams.org,

A senior United Nations human rights official on Wednesday added her voice to the chorus of condemnation of President Donald Trump’s pardons for four U.S. mercenaries convicted of massacring 17 Iraqi civilians in 2007.

Marta Hurtado, a spokesperson for the U.N. Office of the High Commissioner for Human Rights (OHCHR), said in statement that the agency is “deeply concerned” by Trump’s December 22 pardon of former Blackwater guards Paul Slough, Evan Liberty, Dustin Heard, and Nicholas Slatten. The four men were sentenced to 12 years to life in prison for crimes including for first-degree murder for their roles in the September 16, 2007 Nisour Square massacre in central Baghdad.  “Pardoning them contributes to impunity and has the effect of emboldening others to commit such crimes in the future,” Hurtado said of the Blackwater guards.

“By investigating these crimes and completing legal proceedings, the U.S. complied with its obligations under international law,” she added. “The U.N. Human Rights Office calls on the U.S. to renew its commitment to fighting impunity for gross human rights violations and serious violations of international humanitarian law, as well as to uphold its obligations to ensure accountability for such crimes.”

In one of the most publicized crimes of the U.S.-led invasion and occupation of Iraq, Blackwater mercenaries were escorting a diplomatic convoy when, apparently unprovoked, they opened fire in the crowded square with machine guns, grenade launchers, and other weapons in broad daylight.

“The shooting started like rain,” recalled survivor Fareed Walid Hassan, who said he witnessed a woman dragging her dead young son as she fled for her life. Another victim, Mohassin Kadhim, was shot dead as she shielded her son in her arms.

Survivor Mohammed Kinani’s son Ali, age 9, was shot in the head as they sat in their car.

As Donald Trump tonight pardons Blackwater contractors convicted of murdering Iraqi civilians in Nisour Square, Iraq, it’s worth (re)watching my rather intense exchange with Blackwater founder Erik Prince on this very issue, back in 2019, on @AJHeadtoHead:pic.twitter.com/7f4unXn1zz

“I was standing in shock looking at him as the door opened, and his brain fell on the ground between my feet,” Kinani said.

When the shooting finally stopped after 15 horrific minutes, 17 Iraqis—men, women, and children; people fleeing in cars and on foot; a man with his arms raised in surrender—lay dead. Twenty others were injured, some severely, including one victim wounded by a grenade launched into a nearby girls’ school.

Medea Benjamin, co-founder of the anti-war group CodePink, tweeted Tuesday that “Trump could have pardoned whistleblowers Julian Assange, Chelsea Manning, and Edward Snowden. Instead he chose to pardon four Blackwater mercenaries who murdered 17 Iraqi civilians, including two boys [aged] 8 and 11, in an unprovoked attack on a crowd of unarmed people.”

By pardoning war criminals (Blackwater) over whistleblowers (Assange), Trump missed a huge opportunity to sell himself as anti-establishment.

“To this old prosecutor, it feels like what he just did was like an indiscriminate drive-by on the rule of law,” Kirschner continued. “I mean, he pardons people who are lying to the FBI as part of the Russia probe. He pardons Republicans who were either stealing from their donors, committing campaign finance violations, or engaged in insider training.”

Take a look at this story about Dustin Heard, one of the four Blackwater murderers pardoned yesterday. One interesting thing about this decision is that you find, on the few sites still allowing comments, a LOT of disgust and shock from US Iraq vets…https://t.co/21bxgwgLnh pic.twitter.com/2Zf4aIgPqv

“What galls me the most and hits home for me personally is [that]… these four Blackwater contractors… slaughtered innocent, unarmed, Iraqi men, women, and children,” he added.

“That was prosecuted… three times by my former office, the U.S. attorney’s office for the District of Columbia. The lead prosecutor, a gentleman named Pat Martin, is somebody I tried murder cases with. He poured his heart and soul into fighting for justice for those Iraqi victims.”