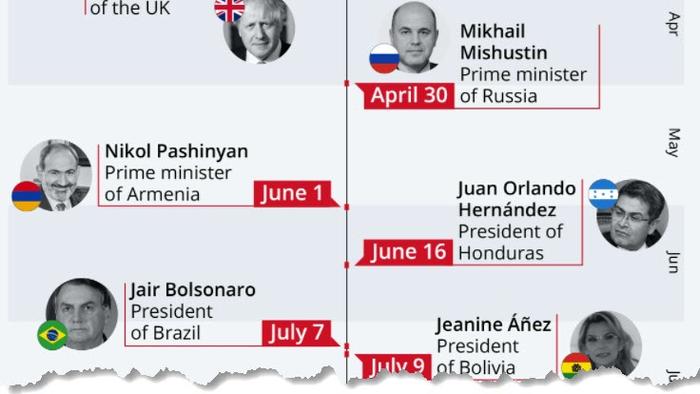 
The President of France, Emmanuel Macron, has tested positive for Covid-19. An official statement this morning read:

“The President of the Republic has been diagnosed positive for Covid-19 today. This diagnosis was made following an PCR test performed at the onset of the first symptoms.”

As Statista’s Martin Armstrong shows in the infographic below, Macron is now part of a growing list of world leaders whose coronavirus test has come back positive.

The highest profile case to date occurred when Donald Trump announced on October 2 that he and his wife, Melania Trump, had contracted the virus, forcing the U.S. president to suspend his re-election campaign travel and spend three nights at the Walter Reed Medical Center.

Boris Johnson, the British prime minister, was the first major political leader to make his diagnosis of Covid-19 public, on March 27. Johnson was hospitalized for a week and spent three nights in intensive care until he took up his post again on April 27. The president of Brazil, Jair Bolsonaro, also announced that he had contracted the disease on June 7.

In the case of Ambrose Dlamini, although no specific cause of death was initially mentioned, the Eswatini prime minister died in hospital on December 13 – approximately 4 weeks after announcing his positive Covid-19 test result.