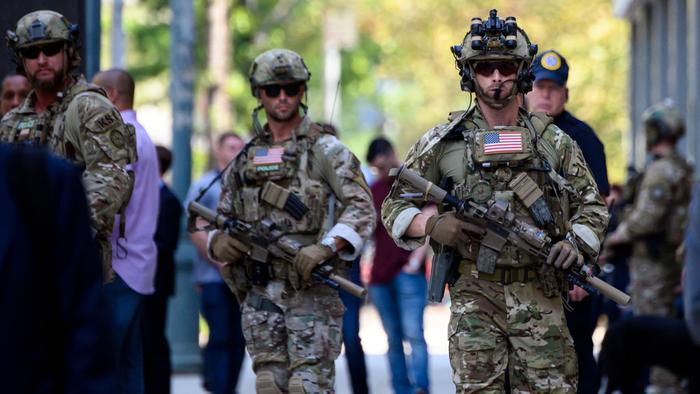 
Authored by Chris Farrell via The Gatestone Institute,

Here is the answer: Law enforcement corruption. The question? Why are we continuing to fight and lose the “War on Drugs,” proclaimed by President Nixon, almost fifty years ago, in June 1971?

The United States is incapable of defeating Mexican cartels? We can transport armored and special operations forces halfway around the world to the Middle East and Southwest Asia, and defeat both conventional and irregular military forces — but we cannot secure our southern border and stop the poisoning of our own population?

According to the Centers for Disease Control and Prevention, “Over 81,000 drug overdose deaths occurred in the United States in the 12 months ending in May 2020, the highest number of overdose deaths ever recorded in a 12-month period…” That is equal to one-third of the total number of deaths supposedly attributed to the COVID pandemic.

Deaths equal to one-third of the pandemic? From another cause? Where is the wall-to-wall news reporting on that public health crisis? Why aren’t people marching in the streets demanding action and justice for that threat to human life? Since Joe Biden was elected president, we have not heard a peep from Antifa and BLM — maybe they can take up the drug overdose cause?

In October, federal law enforcement officials arrested Mexican General Salvador Cienfuegos as he arrived in Los Angeles for a family vacation. Cienfuegos was accused of taking bribes and protecting cartel leaders when he served as defense minister from 2012 to 2018. A month later, the U.S. dropped charges and returned Cienfuegos to Mexico. “Foreign policy considerations” was the official lie covering for the reversal of what might have been an incremental step forward towards legitimate justice in America’s decades-long, losing “War on Drugs.” Every thinking person who has contemplated the drug corruption crisis confronting America knows that absolutely nothing will happen to Cienfuegos now that he is back in Mexico. He gets off Scot-free, other than having to vacation in places other than the United States.

The Wall Street Journal, reporting on the Cienfuegos debacle, noted:

“Gen. Cienfuegos’s return puts an uncomfortable spotlight on Mexico’s judicial system. More than nine in 10 crimes are never reported or punished, according to the country’s statistics agency.”

Let us look more deeply at the drug crisis we face at the level of families and communities. We can get lost looking at national overdose numbers and corrupt foreign generals. Dirty cops are killing Americans, directly and indirectly. In a border community like El Paso, the Mexican cartels have an insidious, silent and powerful control that few people wish to acknowledge or accept — that includes a largely compliant news media who usually report what happens, but rarely, if ever, ask “Why?” or “How can this go on, decade after decade, without accountability or resolution?”

More than seven years of ongoing investigation by Judicial Watch in that region has revealed law enforcement corruption that ranges on a scale from merely turning a blind eye; to marked law enforcement vehicles being used to move burlap bales of marijuana; all the way up to senior officials communicating with and tipping-off cartel members about planned operations. That is what some of the supposedly “good guys” are doing.

This is a dark, dangerous and threatening side of life in American communities across the country. The drugs do not just materialize out of thin air in Dayton, OH, or Rockville Centre, NY, or Whitefish, MT. If a population is dying from overdoses that is one-third as large as the COVID pandemic — and we don’t see, don’t hear about it, and apparently don’t really care about it — what does that say about us?

Tens of thousands of law enforcement officers, billions of taxpayer dollars, nearly fifty years — and the highest overdose rate in history? It is terribly unpopular to blame law enforcement, especially when they are being unfairly attacked by the militant fringe elements like Antifa and various lunatic municipal officials seeking to defund them — but cleaning house within various agencies and increasing police pay would go a long way towards thwarting our greatest domestic threat.

A year ago, President Donald J. Trump declared he would name Mexican Cartels as foreign terrorist organizations. He paused his decision, and then tabled it, based on assurances from Mexican President Andrés Manuel López Obrador and a reported wave of resistance from his own cabinet.