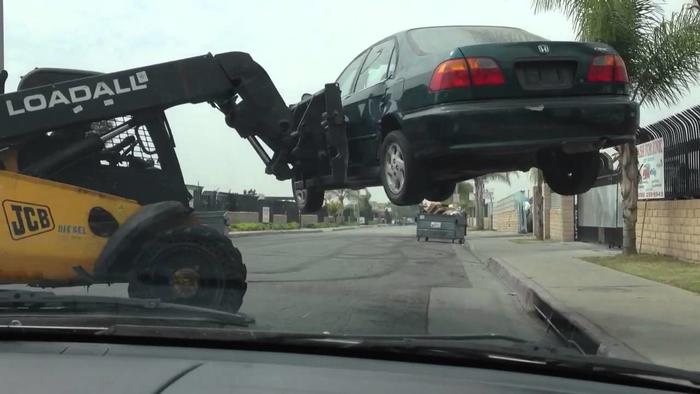 With all the things that are going on would it surprise you that before long the government may take away your right to drive. While this may sound absurd, please bear with me. For years in my state, a question that is on every driver’s test is, Is driving a right or a privilege?  Of course, the answer is, it is a privilege. If you ask the Department of Motor Vehicles (DMV) in your state expect them to agree. Driving isn’t something just anyone can do. Not legally anyway. It’s a privilege that’s earned by showing you have the skills and knowledge to drive safely.

Sorry, This Car Only Comes As A Self-driver

The point they want to make it clear is that you know driving is a privilege and something they can take away from you. To most Americans who have grown up with an automobile, the idea may sound foreign or strange but within a few years, only a small percentage of us may be allowed to own or operate a vehicle. I’m not predicting this will happen overnight but it is something that is likely to unfold over three to seven years as big tech slowly tightens the screw and asserts more control over our lives.

After only a few months of living in a Covid-19 world, it has become clear those in charge can change the rules in a blink of an eye. The idea the world is moving in the direction of removing this so-called privilege started to emerge just a few years ago. Now several trends are rapidly coming together which makes this much more probable, a few are listed below.

* People are becoming more comfortable with the idea of car sharing

* Many people cannot afford an automobile

Just the other day Apple threw its hat into the ring when it announced its intention to move forward with developing self-driving car technology.  According to Reuters, Apple is targeting 2024 to produce a passenger vehicle. Make no mistake, this has the potential to derail Elon Musk’s plan for Tesla to put out a million robotaxis. This places Apple in the position of competing with others with major self-driving projects, including Tesla and Google/Alphabet’s Waymo project which stands for a new way forward in mobility.

Adding to the validity that Apple is serious about moving in this direction, Reuters also reported Apple’s cars might include sensors and a new “monocell designed battery” that has been developed internally at Apple. Such a battery could be a much-needed breakthrough in battery technology. The lack of better batteries is one of the biggest problems currently facing the EV industry. A new battery design that could “radically” reduce battery cost and increase a vehicle’s range. A better battery has been seen as the holy grail of the EV industry.

As to how “they” might remove your driving privileges, the answer is, slowly at first then rapidly after they reach a certain point. Simply by raising the cost of owning and operating a vehicle they can dent the number of people desiring to drive. This can be done by raising the price and requirements to get and maintain a driver’s license or hiking fees and excise taxes on various types of vehicles. Making the claim this new technology is much safer we might see insurance rates for individuals skyrocket compared to those paid for autonomous vehicles.

They could also ban human-operated vehicles from entering certain areas. Another way to choke off our desire to own and operate a vehicle is to sever our ability to get fuel or parts by making them either more expensive or impossible to get. One or all of these tools would substantially reduce the desire to drive for many people. Remember this is about those in power being able to assert their power over the masses. This can be tied to a narrative that it is being done for the greater good and the claim it will massively reduce climate change by cutting waste and making society more efficient.

While some of you may have a difficult time imagining a world in which you would be totally dependent on a self-driving vehicle to get around, the writing is already on the wall. Even at the early stage of their development, some carmakers are already suggesting or claiming that self-driving vehicles will reduce accidents to nearly zero and save thousands of lives each year. The problem is many people enjoy driving and the freedom that comes with it. Some of us have absolutely no desire to own a self-driving car.

In the world I have described, only the rich and powerful would have a car and be granted the privilege to drive them. For those of you that doubt this could happen or be the goal of our new masters, I remind you few people would have ever predicted many of the Orwellian tactics governments across the world have used to squelch this pandemic that has killed far fewer people than originally predicted.