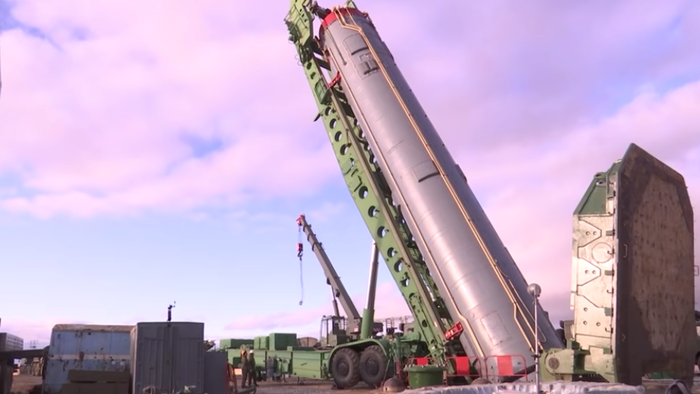 
Days after the US blamed Russia for a hack attack of US government computer systems, the Russian Defense Ministry, in a show of force, published a video on YouTube of a new hypersonic boost-glide vehicle entering “combat duty,” according to Defense Blog.

The Ministry of Defense of the Russian Federation said a hypersonic missile outfitted with an Avangard nuclear boost-glide vehicle was put into “combat duty” in the Dombarovsky division of the Strategic Missile Force.

The hypersonic boost-glide vehicle can travel at Mach 20 and outmaneuver the world’s most advanced missile defense systems.

According to Defense Blog, the Avangard is “mounted on top of an intercontinental ballistic missile, the Avangard can carry a nuclear weapon of up to two megatons.”

The video, titled “Installation of the Avangard intercontinental ballistic missile in a silo launcher,” was published Tuesday by the Russian Defense Ministry.

Here’s the translated version of the video’s description:

“In the Orenburg Region, the rearmament of the first unit in the Armed Forces of the Russian Federation, equipped with the Avangard missile system, continues. The newest intercontinental ballistic missile is installed in a silo launcher using a special transport and loading unit. The most complex technological operations last several hours.

“The Avangard missile system with a hypersonic unit will effectively complement the strategic missile forces’ weapons systems, expand the combat capabilities of the grouping, and also create conditions for the development of new types of combat equipment for modern and promising strategic missiles. The implementation of the measures planned for 2020 for the rearmament of the Strategic Missile Forces grouping made it possible to increase the share of modern strategic missile systems and increase the group’s capabilities to carry out nuclear deterrence tasks.”

Since Russia began touting its hypersonic missiles a couple of years ago – the hypersonic threat from Moscow has spooked the Pentagon.

“The hypersonic threat is real, it is not imagination,” Air Force Lt. Gen. Samuel Greaves told a DC defense conference in 2018. “Greaves comments come amid reports that assess Russia will be capable of fielding a hypersonic glide vehicle, a weapon that no country can defend against, by 2020,” a report at the time underscored alarmingly.