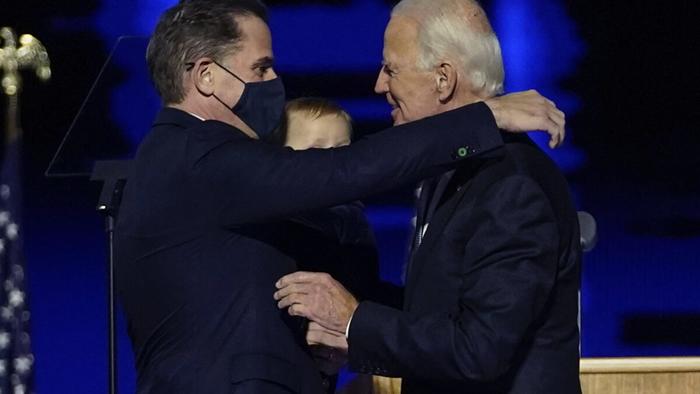 Joe Biden on Wednesday claimed accusations against his son, who is under investigation by federal authorities, are “foul play.”

“Look, I have, we have great confidence in our son. I am not concerned about any accusations that have been made against him. It’s used to get to me,” Biden told late-night host Stephen Colbert, referring to his son, Hunter Biden.

“I think it’s kind of foul play, but look, it is what it is. He’s a grown man. He’s the smartest man I know, in terms of pure intellectual capacity. As long as he’s good, we’re good,” Biden added.

I know @StephenAtHome is an entertainer and not a journalist but this is still embarrassing. Rather than trying to break news about the FBI’s investigation into Hunter (which Biden himself is implicated in), Colbert asks him to go after Republicans making this an issue. pic.twitter.com/HjCEPOdap2

Jason Miller, a senior adviser for President Donald Trump’s campaign, responded on social media, writing: “Spoken like somebody who was bought off himself!”

Biden said he could still work with people who promoted the accusations.

It got worse. Colbert follows up asking how he can work w/ Republicans if they’re making Hunter an issue.

Biden, in a rambling response, says if he were in high school he’d want to “go a round”

Jill interjects: “But you have to take the high road” pic.twitter.com/7Jr5n3f6hM

But he signaled he was frustrated about the situation, adding:

“It doesn’t mean I wasn’t angry and it doesn’t mean if I were back in the days of high school I wouldn’t say, ‘come here,’ and go a round.”

Hunter Biden last week said he’d just learned that he was being investigated for his “tax affairs” by the U.S. Attorney’s office in Delaware. The office said it couldn’t comment on ongoing investigations.

Hunter Biden engaged in business deals in China, Ukraine, and elsewhere while his father was vice president.

Several of his one-time business partners have been convicted of participating in a fraudulent scheme.

One showed Hunter Biden referring to his father and a Chinese businessman “office mates.”

Senators investigating Hunter Biden said he was tied to foreign individuals who have ties to the Chinese Communist Party.

A Biden spokesman said in October that the former vice president “has never even considered being involved in business with his family, nor in any overseas business whatsoever.”

“He has never held stock in any such business arrangements nor has any family member or any other person ever held stock for him,” the spokesman said.

Tony Bobulinski, one of Hunter Biden’s former business partners, said in October that he discussed a deal with a Chinese energy conglomerate with Joe Biden.

Tony Bobulinski, a former associate of Hunter Biden, speaks to reporters at a hotel in Nashville, Tenn., on Oct. 22, 2020. (Mandel Ngan/AFP via Getty Images)

“It should be noted that, collectively, President Trump’s family and associates produced documents and agreed to appear at interviews with a number of congressional committees,” Sen. Ron Johnson (R-Wis.), Senate Homeland Security and Governmental Affairs Committee chairman, said in a statement.

“It would be nice, and in the public’s interest, if the Biden family and their associates would be equally cooperative with the Senate, the American people we represent, and the mainstream media that has now joined our long interest in these crucial matters.”

Hunter Biden’s lawyer hasn’t responded to requests for comment. He has not released any public statements since his client revealed the existence of the investigation.

Republicans are pushing for a special counsel to be appointed to take over the probe to insulate it from a potential Joe Biden administration.

“I am absolutely calling on the special counsel to look at all things Hunter Biden to see if he presents a conflict with the Biden administration regarding his business dealings in Ukraine, which is overrun with Russian agents, and any activity he had with the Chinese government,” Senate Judiciary Committee Chairman Lindsey Graham (R-S.C.) told reporters in Washington on Wednesday.