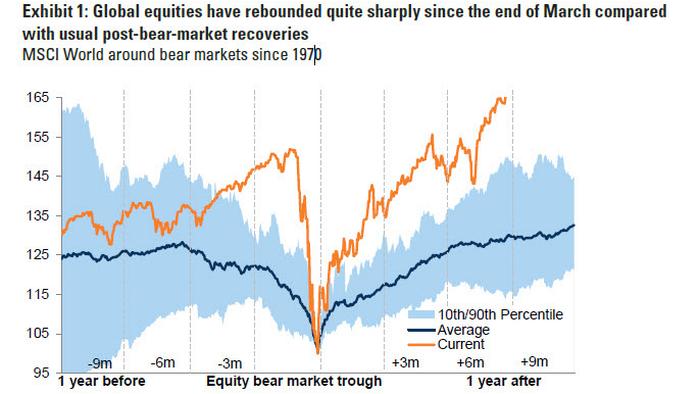 
In its final report for the year, Goldman’s European Weekly Kickstart team has put together 10 charts summarizing the “unforgettable” 2020 while looking at what’s in store for 2021.

Goldman starts off chronologically, writing that as we entered 2020 European stocks were a sea of calm with no major elections planned in France or Italy, and a recent, comfortable Conservative majority in the UK Parliament that broke the political deadlock made a swift Brexit, and the market improved steadily reaching a fresh all-time high of 434 for the STOXX 600 and 3,386 for the S&P 500 on February 19. Then, the coronavirus hit the global economy, and we witnessed the fastest bear market in history: it took just 22 days for the S&P 500 to lose 20% of its value, and the US and European benchmarks were both down c.35% from peak to trough. This however was followed by the fastest recovery in history as well.

The surge was thanks to the unprecedented global central bank response: they cut rates to zero and introduced fresh and creative QE measures. For some countries, the response was nearly ten times larger than in the Global Financial Crisis. As a result, bond yields dropped to the lowest levels on record…

… and the proportion of global bonds offering a negative yield hit a record high, representing roughly one-quarter of the global debt market.

In real terms, yields are even more negative. Paradoxically, amid the economic depression, globalists pushed to take advantage of the crisis, the economic downturn and resultant low rates, which allowed governments to increase their fiscal spending and direct funds towards “net zero carbon ambitions.” Thus 2020 became ‘the Year of ESG’, and year-to-date European ESG (or SRI) funds received $42bn net inflows from all mutual fund investors globally. In contrast, all other European equity funds (active + passive) saw a net outflow of $73bn. This year, 50% of new equity mutual funds created globally were referenced as ESG funds.

In the US, it took the equity market five months to return to its pre-crisis peak. Technology was (again) the main beneficiary of these events: FAAMG stocks approach the close of 2020 with a 25% share of the S&P 500. Europe, which lacks Growth companies, was left behind. But Goldman notes that European indices have changed. Twenty years ago, the ten largest corporates in Europe were all Telecom, Oil or Banks names, whereas today, there is not a single Telecom, Oil or Bank (with the exception of HSBC) in the top ten. Europe is now dominated by what Goldman dubs the GRANOLAS, which offer some quality: (1) Growth, (2) Stability and (3) Income.

The rest of 2020 was a rollercoaster ride for European companies; they have moved up and down on hopes around a Covid vaccine and fears of further lockdowns. The secular outperformance of Growth vs. Value continued on the back of what was well understood: low rates, low inflation and low economic growth.

The market pushed valuations for Growth vs. Value to an extreme premium and, prompted by the prospects for vaccines and a strong and synchronised global recovery, Goldman said that it was ‘Time for Value‘’.

In FX, the EUR has appreciated 8% against USD in 2020. Europe equities have c.43% of domestic sales and c.57% of sales outside Europe. Despite the Euro potentially being a headwind to returns, Goldman finds that Equity and FX move in tandem, and improving GDP has the potential to offset Euro appreciation. The next chart shows that even the DAX, which is one of the most internationally exposed indices in Europe, is positively correlated with the Euro. Indeed, the Euro is a risk-on currency, so there has been a strong increase in the correlation between the DAX and EUR/USD, with a rise in correlation between the Euro and economic activity.

In terms of baskets, Goldman likes its fiscal infrastructure basket which consists of Europe ex-UK companies with more than 30% of revenue from Europe and in sectors which governments have specifically targeted for investment and/or our economists expect to be targeted.