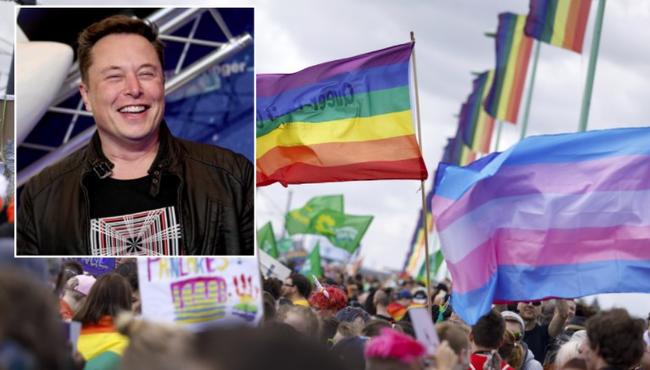 
Elon Musk certainly has a penchant for stirring the pot, if not anything else.

It was just hours ago we noted that the CEO of a $600 billion company was on Twitter tweeting memes about his “huge cock” – and now Musk’s recent comments about Trans pronouns have landed him in hot water with – well, people who care about that sort of thing.

“I absolutely support trans, but all these pronouns are an esthetic nightmare,” Musk said yesterday on Twitter.

I absolutely support trans, but all these pronouns are an esthetic nightmare

The comment comes after Musk tweeted a meme of what appears to be a self-indulgent soldier congratulating himself for putting his pronouns in his Twitter bio. Putting your pronouns in your bio is widely seen as virtue signaling by many who are critical of the dozens of trans pronouns the “woke” mob wants people to memorize.

Musk then tried to defend himself from the woke mob – usually a fruitless exercise – “by posting Tesla’s 100/100 score on the Human Rights Campaign’s LGBTQ corporate equality index,” according to RT:

Naturally, this too was criticized, by none other than the former Human Rights Council press secretary, activist and writer Charlotte Clymer, who scolded Musk and reminded him that points can be deducted for behaviors like offensive tweets from company CEOs.

Put pronouns in your bio to piss Elon Musk off, to piss JK Rowling off, to piss off every transphobe who oppresses the trans population!

elon musk inventing the ugliest fucking vehicle ever made: trans people are aesthetically upsetting but don’t think i’m transphobic for saying so! pic.twitter.com/DCvxof51N8

“I support trans but all these pronouns are an aesthetic nightmare” yeah i bet that hair line was too @elonmusk glad you “earned” enough money to get them fuckin hair plugs you fugly bourgeoisie bitch pic.twitter.com/7WPVSNy7FB

elon musk basically said “hey no hate to trans people but i fucking hate your pronouns. really no hate to yall tho tho, tesla totally is lgbt friendly see look at this article” pic.twitter.com/S4JNSSRrk1

The nerve to use ‘aesthetic nightmare’ when this shit exists lmao pic.twitter.com/1UxbyOZQTz

But we think the funniest rebuke of Musk’s statements came from the lede over at News18: