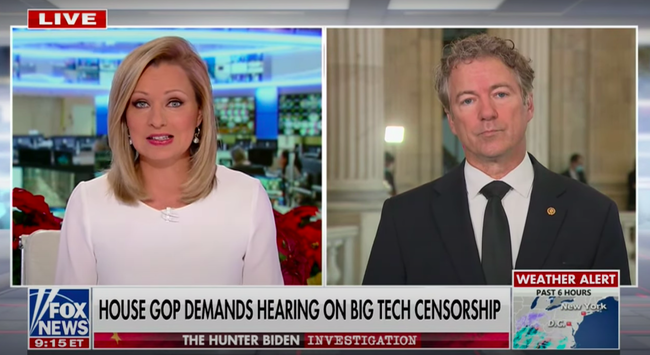 
Authored by Joseph Jankowski via PlanetFreeWill.com,

Senator Rand Paul accused Georgia and other states of using the COVID-19 pandemic to steal the election in a move he says could have came from the playbook of Obama Chief of Staff, Rahm Emanuel, who famously said, “you never want a serious crisis to go to waste.”

Appearing on Fox News prior to the Wednesday Senate hearing on election irregularities, Senator Paul was asked how revelations, such as the one out of Georgia showing more than 1,700 voters illegally submitted two ballots during the Nov. 3 contest, would effect the upcoming runoff elections in the Empire State of the South.

Paul would respond, saying: “You’d think that all of this would be investigated and tried to be fixed before the election.”

The Senator went on to run off a list of voter fraud examples in Georgia, including the 1,700 double votes, votes from commercial addresses, and dead voters casting ballots.

He also pointed to potential illegal voting activity in Nevada:

Echoing the case laid out by Texas Attorney General Ken Paxton in his recently dismissed Supreme Court lawsuit, Paul accused states of using the COVID-19 crisis to dodge state and federal election law, comparing the move to a play right out of the Obama, Rahm Emanuel playbook:

“It’s sort of Obama, Rahm Emanuel’s playbook. They took the crisis of COVID and then they changed election law … not by changing law at the state legislature, they had secretaries of state and or governors simply by fiat change the law to say ‘oh you can keep counting votes’ when the law did say that. So, this election really was stolen in a way and it was stolen because people changed the law …”

Shortly after his appointment as Obama’s Chief of Staff, former Chicago Mayor Rahm Emanuel famously uttered the words “You never want a serious crisis to go to waste” during a corporate panel sponsored by the Wall Street Journal.

“What I mean by that is never allow a good crisis to go to waste when it’s an opportunity to do things that you had never considered, or that you didn’t think were possible,” Emanuel would explain at the time.

Trump Campaign Attorney, Jesse Binnall, would laid out similar accusations of voter fraud to those given by Senator Paul during the Wednesday Senate hearing.

But, Senator Paul was not done, as Douglas Braff reports via SaraACarter.com, during today’s Senate hearing examining irregularities during 2020 presidential election the Kentucky Republican claimed:

“The fraud happened. The election in many ways was stolen…And the only way it’ll be fixed is by, in the future, reinforcing the laws.”

Rand Paul: “The fraud happened. The election in many ways was stolen.” pic.twitter.com/LyUPp1Oebp

“But I think [Kreb’s] job was keeping the foreigners out of the election. It was the most secure election based on the security of the internet and technology, but he has never voiced an opinion […] on whether or not dead people voted—I don’t think he examined that,” Paul said toward the end of his speaking time, then questioning if Krebs examined non-citizens’ voting.

Many Republicans, in alleging that widespread election fraud occurred in the 2020 election, have often cited claims that a lot of dead people and non-citizens voted. The over 50 lawsuits challenging the results of the election in certain swing states alleging election fraud have overwhelmingly failed in the courts.

“So to say it was the safest election—sure, I agree with your statement if you’re referring to foreign intervention,” Paul continued.

“But if you’re saying it’s the safest election based on no dead people voted, no non-citizens voted, no people broke the absentee [ballot] rules, I think that’s false and I think that’s what’s upset a lot of people on our side is that they’re taking your statement to mean ‘Oh, there were no problems in the elections.’”

“I don’t think you examined any of the problems that we’ve heard here,” he added, “so really you’re just referring to something differently, the way I look at it.”