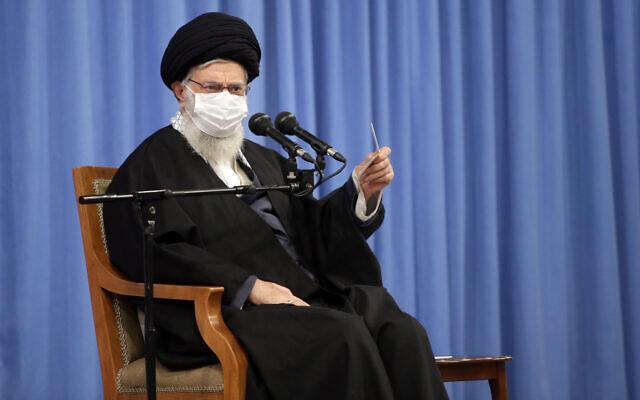 
Days ago into last week there were widespread rumors spreading on Mideast social media of the severe health decline of Iran’s Supreme Leader Ali Khamenei. The persistent rumors ranged from saying he was in a coma even to some claiming his death.

But Khamenei put the unfounded speculation to rest after on Wednesday morning he appeared at an event marking the first anniversary of the death of IRGC Quds Force General Qassem Soleimani. He hasn’t made a public appearance in three weeks.

But more importantly he emerged to give final high level backing to prior statements of Iranian leaders, most notably President Hassan Rouhani, indicating that should the United States return to the 2015 nuclear deal abandoned by Trump in 2018, Iran would “follow within an hour”.

His statement sends a clear signal to Iranian hardliners not to stand in the way of talks with US President-elect Joe Biden, who takes office next month having pledged to rejoin the accord abandoned by Donald Trump.

“If sanctions can be removed, we shouldn’t delay, not even for an hour,” Khamenei said Wednesday in comments almost identical to ones made this week by President Hassan Rouhani.

Khamenei added, “I support the country’s officials as long as they are committed to the nation’s goals.” He expressed that he wants to see a swift removal of US-led sanctions on the country, especially the devastating banking and energy sector restrictions.

Now Rouhani and Khamenei have both sent clear messages to @JoeBiden by emphasizing they want sanctions relief which means a US return to JCPOA. Iran’s recent violations of the deal are reversible and can be done as soon as the US returns to the deal. Biden should prioritize this. https://t.co/ZNKXxLOGzg

But he still underscored in a nod to hardliners that skepticism is warranted no matter who is in the White House and despite prior Biden pledges that he’ll restore US participation in the 2015 JCPOA nuclear deal. In the end officials of the Islamic Republic should “not to trust the enemy,” he warned.

Meanwhile, hardliners who primarily exercise power through the Iran’s parliament and Guardian Council have recently approved a law to end intrusive United Nations inspections of the country’s nuclear facilities.

This is his first public appearance after he was last seen on November 24. Keep in mind Khamenei has prostate cancer. pic.twitter.com/YO5Qmqd0Qj

This looming drastic action, which doesn’t appear to have been implemented yet, is likely by design intended to give Iran significant leverage after January 20, when the regime deals with the new Biden administration.